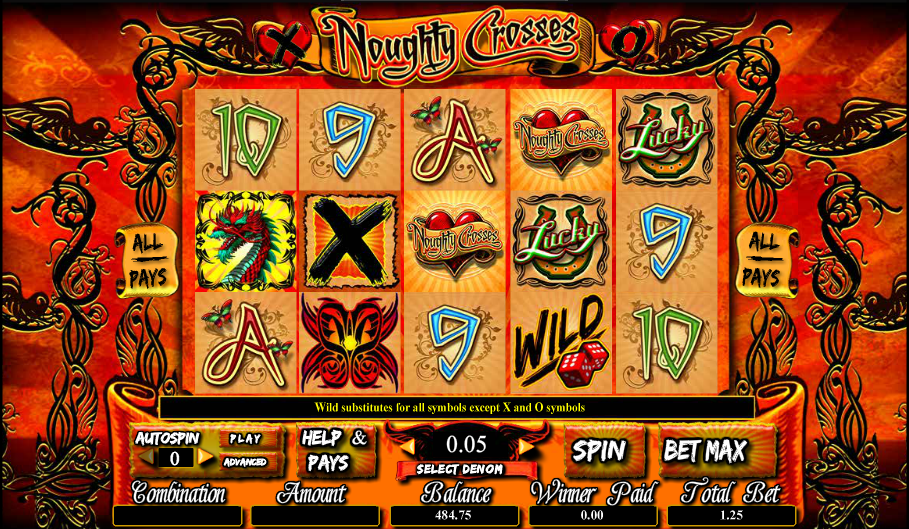 The ancient game of noughts and crosses elbows it’s way onto the spinning reels in this atmospheric online slot from NextGen Gaming. It’s called Noughty Crosses and it takes that simple gameplay and places it in a gothic, surreal setting which is implemented in a stylish and high quality manner – read all about it below.

Noughty Crosses is a five reel slot with three rows and 243 ways to win – there’s no traditional payline structure and you will win just by landing matching symbols in adjacent rows starting from the left hand side. Red is the predominant colour on display here and there’s a slightly creepy vibe to the game which suits the theme well.

There are five high value symbols including the Noughty Crosses logo, a Chinese dragon, a lucky horseshoe and a red/black icon; 9, 10, J, Q, K and A make up the lower values.

The wild symbol is a pair of dice which substitutes for all others except the ‘X’ and the ‘O’ – these appear stacked on reels two, three and four only and are the key to the features.

Three are two different way to trigger the free spins feature as follows:

As you can see, both features are identical and unfortunately neither can be re-triggered.

If you trigger both bonuses in the same base game spin the ‘X’ will go first, followed by the ‘O’s.

Noughty Crosses is a certainly an atmospheric slot and it’s good fun to play too; the soundtrack is a jaunty, rocky affair which keeps things ticking along nicely and there’s an RTP of 96.63%.