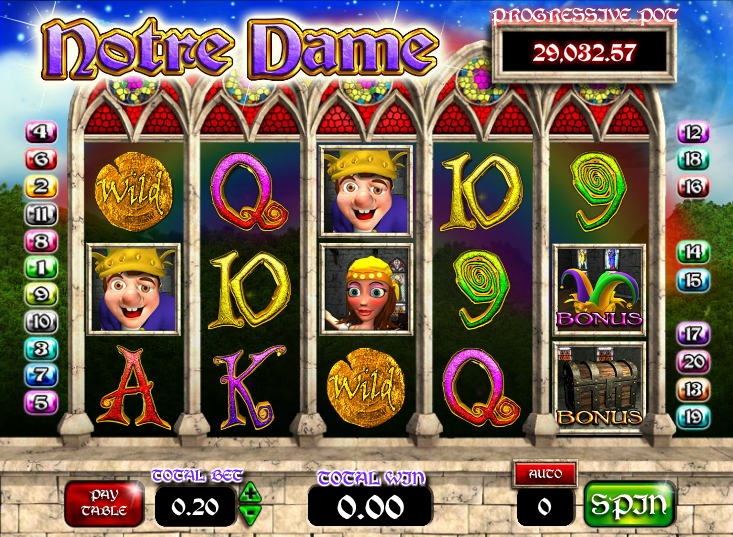 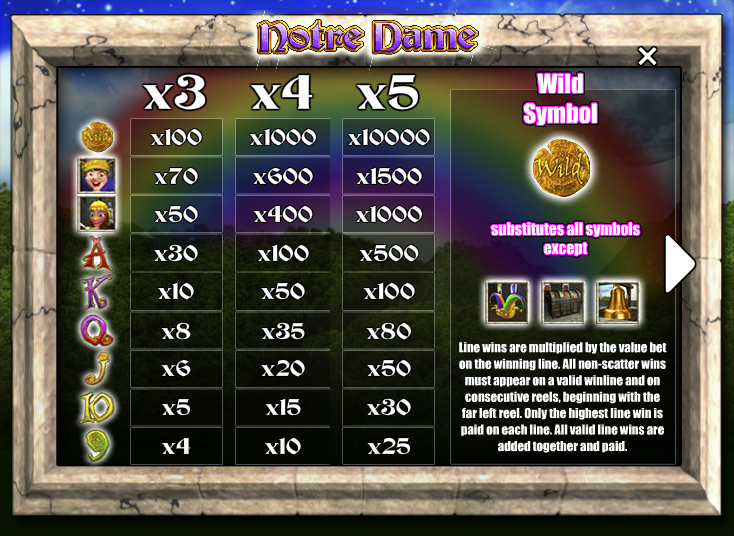 Victor Hugo published The Hunchback Of Notre Dame in 1831 and it’s a story of gothic romance set around the famous French cathedral of Notre Dame. That’s also the name of this online slot from Mazooma Interactive which includes the characters of Quasimodo and Esmerelda along with several bonus features to aim for – read all about it below.

Notre Dame is a five reel slot with three rows and twenty fixed paylines; the reels spin within the windows of the cathedral with coloured, stained glass above. In the distance there’s a view of the night sky over the trees of Paris.

There are just two theme-related symbols – Esmerelda and Quasimodo – and these are joined by the standard 9, 10, J, Q, K and A as the lower values.

The wild symbol is an old gold coin and it will replace all others except for the bonus icons – the jester’s hat, the chest and the bell.

Trigger this by landing three of the jester’s hat scatter symbols anywhere on reels two, four and five; now pick one of those hats to determine the number of free spins (up to 20) and one more to reveal the multiplier for any wins (maximum 7x). You can’t retrigger any more spins from within this round.

This is triggered by landing the bell symbol anywhere on reel three and it’s an instant cash award of your total bet multiplied by a maximum of 20x.

This is awarded when you manage to land three of the chest scatter symbols anywhere on reels one, three and five. You now get to spin a Wheel of Fortune to collect a prize and you can keep doing this and accumulating cash until you hit the ‘Collect’ segment.

There’s also a progressive jackpot to be won here by landing on the diamond which will award the cash amount displayed in the window above the reels.

This can happen randomly in the base game on any losing spin – the reels will respin to award a guaranteed win.

Notre Dame is a cheerful enough game with lots of bonus features to keep things interesting; the RTP is a little on the low side at 92.90% but it does have that progressive jackpot to aim for.