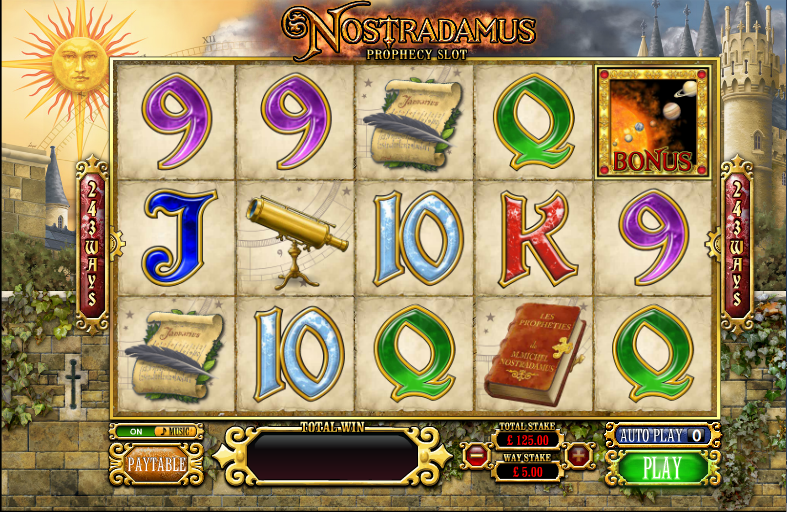 Born early in the 16th century, Nostradamus was the French seer who spent a large portion of his life making vague predictions about the future. Surprisingly there are still people around who believe this man could actually foresee events hundreds of years down the road. Still, it’s a good story and one which is a great theme for this online slot from Ash Gaming which is absolutely loaded with bonus features.

Nostradamus Prophecy is a five reel slot with 243 ways to win which means there is no real payline structure – you can win with matching symbols on adjacent reels from left to right.

The backdrop to those reels is a glimpse of 16th century France with some stylised weather worrying the sky. The main symbols are a parchment/quill, an hourglass, a telescope, the prophecy book and Nostradamus himself. 9, 10, J, Q, K and A make up the lower values.

Bonus symbols include a crescent moon wild, two scatter symbols – the planets and a globe – and the Prophecy Book.

The planets symbol appears on reels one, three and five only but if you can land them you will trigger this feature. The screen will now display the planets spinning around the sun at different speeds. The movement will halt with one or more of the planets on the win line and each will add to a total multiplier prize.

This is the main feature and it’s trigger by landing three or more globe symbols anywhere in view. You will now receive the following:

Reel modifiers are extra features you can choose which are active for five spins only; they are:

Occasionally a scroll will unfurl on the reels and you will receive one of the following awards:

This is one for the high rollers because you need to be playing with stakes of £5.00 per spin to activate it. Each time you land a win with the book symbols you will also receive a additional cash prize.

For us the more bonus features the better so this slot is a real winner as far as we are concerned. Even if you’re struggling to trigger the spins or the planets bonus, there are loads of extra base game awards to enjoy. Excellent stuff!