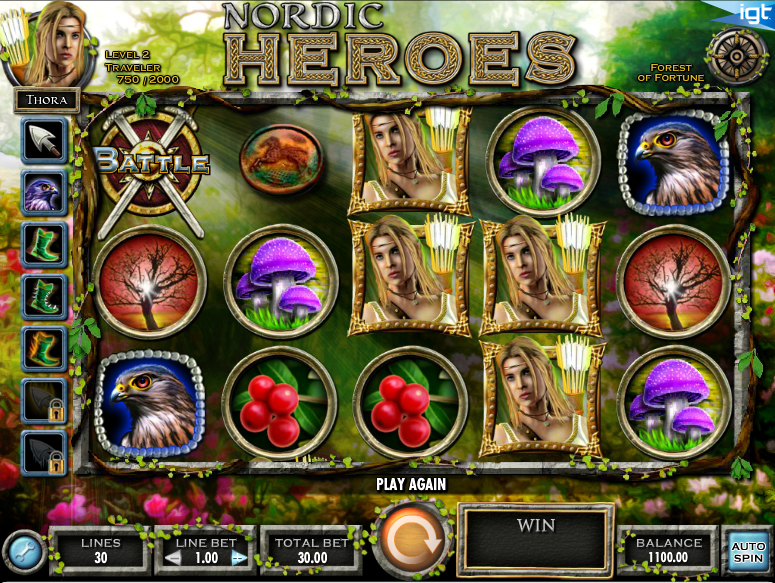 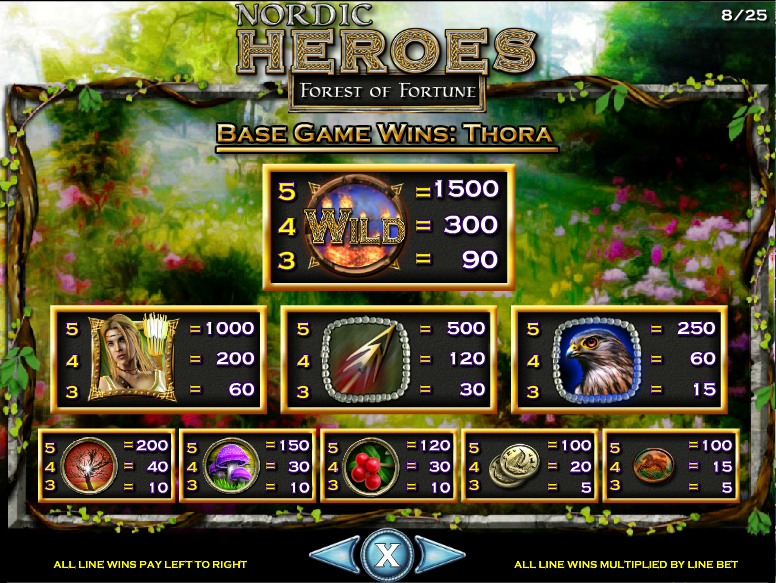 The forests of Scandinavia await those who would like to check out this epic online slot from IGT; it’s called Nordic Heroes and it really is epic in terms of it’s narrative, it’s depth and it’s array of bonus features. It tells the story of Thora, Ragnar and their battle against the various creatures who inhabit the area.

Nordic Heroes is a five reel slot with three rows and thirty fixed paylines; through those transparent, leaf-tinged reels there’s a hazy view of a dense forest and tour gameplay is accompanied by a stirring soundtrack.

When the game begins and before you have levelled up at all there are eight theme-relates symbols – Thora, an arrow, an eagle, a tree, purple mushrooms, berries, silver coins and a bronze coin. These symbols will change relative to the two characters and their location – the levelling up is described in more detail below.

The wild symbol is a circle of fire and it substitutes for all others except the the Battle icon which activates the main feature.

The Battle Bonus is triggered by landing three of the bonus symbols anywhere on reels one, three and five; you now get to play a free spins round combined with a fight against a monster as you can see from the video above.

You will have unlimited spins initially and after each spin your hero and the chosen monster will do battle; each successful hit reduces the life meter. When your life meter is depleted the round is over and you take your accumulated winnings and XP points. Defeat the monster and you’ll move to the next one where the wilds will be enhanced for these spins – beat three and you will receive between 1 and 10 Victory spins depending on your character, location and the number of spins it took to beat the last creature. Victory Spins include extra wilds and multipliers.

During the battle various weapons  are used to hit the enemy and also to avoid damage; there’s a wide range of items available depending on your location, character,  character XP progression and round reached. The screenshot below demonstrates some of Thora’s abilities and the rest are outlines in the paytable. 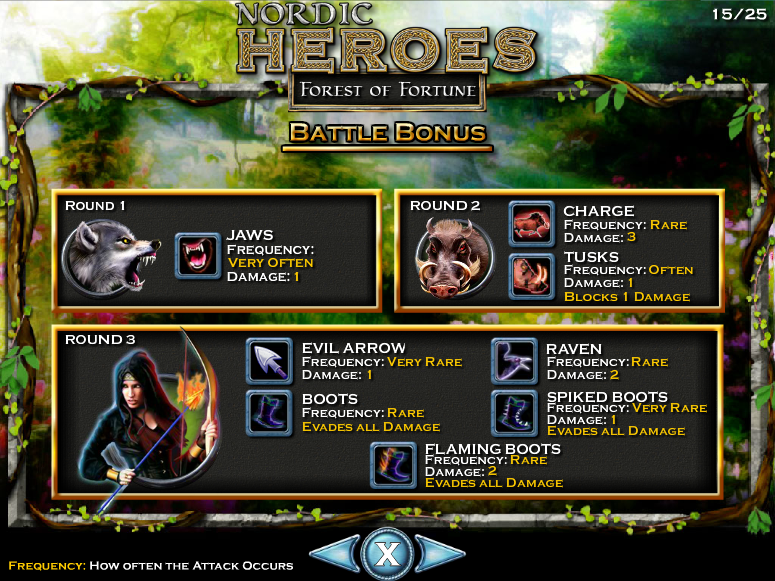 Levelling up is a big part of Nordic Heroes and the only way to accrue XP points is to trigger the Battle Bonus; you will progress up the ladder shown on the right here and this will permanently increase you payout levels, unlock the second character and enter the new area (Sea Of Glory).

The second character Ragnar is unlocked when Thora reaches level three and from this point you can select which character to use; level five unlocks the Sea Of Glory.  At each experience level new abilities to fight the monsters are also unlocked. When you swap characters and locations the symbols will change too but they are worth the same.

This can be triggered during the base game as long as the Battle Bonus is not also activated; a multiplier of between 2x and 30x will be applied to any win and that multiplier depends on the character level.

Nordic Heroes could have been a complicated mess but we think IGT have pulled off a winner here; it certainly took some working out and there are twenty five paytable pages to wade through but the guide above should get you started after which you can refer to that paytable for some of the finer details we’ve omitted here.

Nordic Heroes therefore comes highly recommended and you can’t beat it for replay value as your progress will be stored until the nest time you play. It has an RTP of between 93.02% and 96.34%.