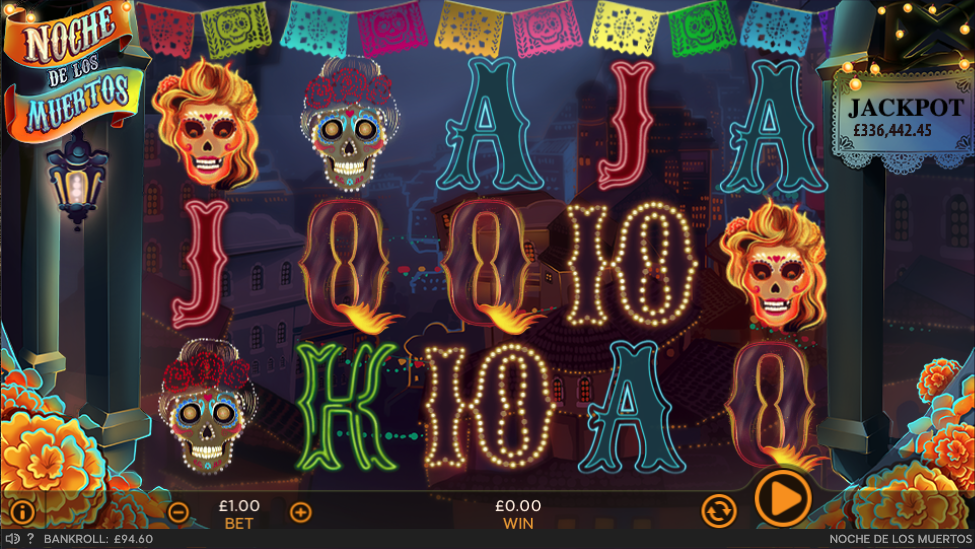 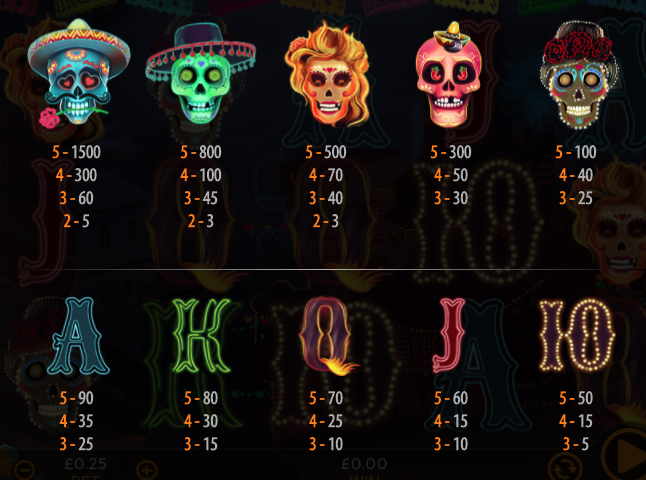 The Mexican Day of the Dead turns up every now and again as the theme for an online slot machine but this time it’s a bit later in the evening because here we have Noche De Los Muertos, a game developed by Random Logic/Section8 Studios with wild features, a Wheel of Fortune and a progressive jackpot.

Noche De Los Muertos is a five reel slot with three rows and twenty five fixed paylines; through those transparent reels there’s a view of this city at night where fireworks illuminate the buildings and presumably shine a light on plenty of drunk partygoers.

The high value symbols are five traditional, accessorised skull masks in various colours while 10, J, Q, K and A make up the lower values; the standard wild is the orange pinata but there’s also one with a blue background with a feature attached. The Wheel of Fortune is the bonus symbol.

Landing the blue pinata wild on reel three will kick this feature off and it will explode, adding up to four extra wilds across the reels; you’ll also receive up to three free respins with those wild symbols locked in place.

This is triggered by landing three of the Wheel bonus symbols anywhere on reels two, three and four; you’ll now get to spin the Wheel to reveal a multiplier of up to 10x and then you get to pick one of four items for another multiplier of up to 5x. These are then multiplied and applied to your total stake to get the final prize.

This is won at random at any stage but increasing your stake will give you a better chance of grabbing the big bucks.

Noche De Los Muertos is an enjoyable sequel to those Day of the Dead slots and its quirky graphics and sound effects suit the theme very well; come for the progressive jackpot but stay for the Exploding Wilds and Wheel of Fortune!