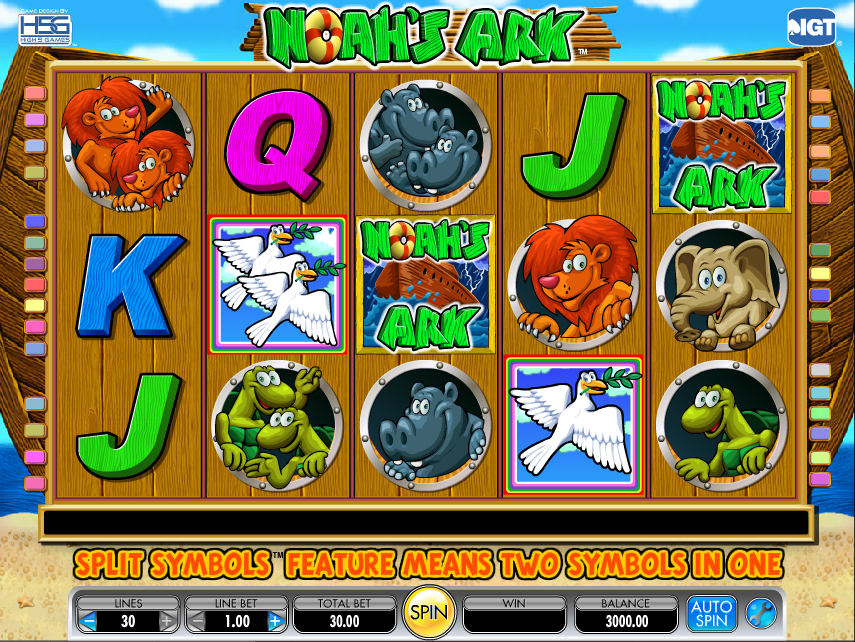 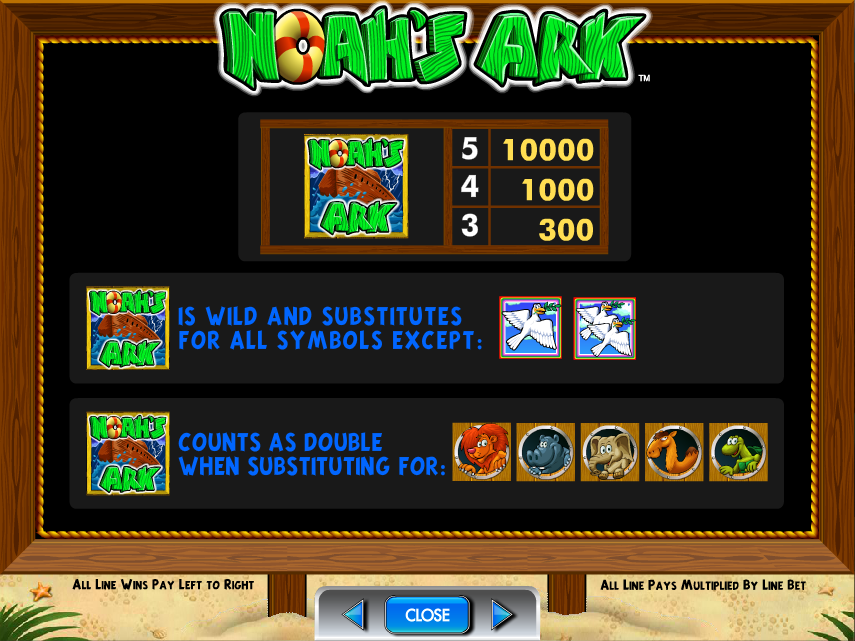 Whether you believe in a literal interpretation of the story of Noah’s Ark or you just like the idea of a boat full of animals sailing around looking for somewhere to land, there’s certainly nothing wrong with playing an online slot based on this watery event. Noah’s Ark is a basic but colourful game from IGT so read on to find out more.

Noah’s Ark is a five reel slot with thirty paylines and behind those wooden reels we can just about make out the ark with the waters rising around it. As you would expect the main symbols are animals – a turtle, a camel, an elephant, a hippopotamus and a lion. J, Q, K and A are the lower values.

The Noah’s Ark symbol is wild and substitutes for all others except the scatter. That’s is represented by the dove which, in the story, was sent to look for land.

You will notice that some symbols appropriately contain two animals; because only three animals are needed to form a winning combo this can be done with just two symbols. It also means that you can theoretically land ten matching animals on the reels in one spin for the highest payout of 2500x your line bet.

Note that a wild substituting for an animal will automatically be worth two of that creature.

You will need to land five or six of the dove scatter symbols anywhere on reels two, three or four to trigger this feature and you will receive the following:

A different set of reels is used during these spins but with the same values. The symbols are a crocodile, am emu, a zebra, a ram and a giraffe. There is no extra multiplier here and it’s also not possible to trigger more spins.

The scatter symbol triggers the feature which means that it has the same chance of occurring if you’re playing one or thirty paylines. This may suit low rollers but your payouts will of course be less.

The graphics are probably a little too basic to overlook but if you can then this is a bright and cheerful slot with lots of cute animals. The RTP is perhaps a little low and ranges from 93.04% – 94.93%.