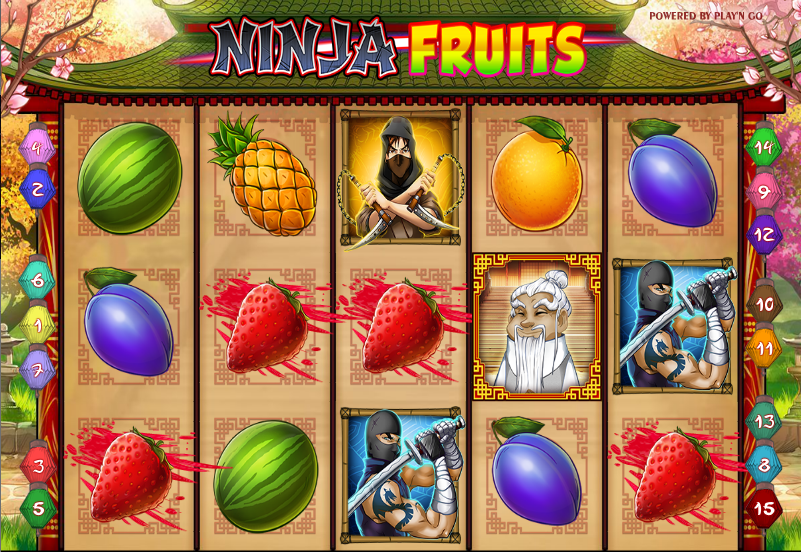 Do Ninjas practice their highly-honed skills on unsuspecting fruit? Frankly we’re a little sceptical but in Play N Go’s universe that’s exactly what happens so who are we to argue? Ninja Fruits is an online slot which brings together these silent assassins to do battle with a range of innocent fruit – the bonus feature is where it gets really messy.

Ninja Fruits is a five reel and fifteen payline slot with a distinctly Japanese feel to proceedings; the reels are set on the side of a pagoda in a traditional garden with blossoming pink trees framing the scene.

Five fruits make up the lower value symbols and these are a plum, a strawberry, an orange, a pineapple and a melon. The four Ninjas themselves are the higher values – two male and two female.

The old man with the long white bread is the wild, the shrunken Ninja star is the bonus symbol and there’s a Geisha scatter which activates the second feature.

If you can land that shuriken on reels three, four and five you will trigger this funky bonus game. You will be faced with a several items of fruit on stands and you must throw the star at them. Hitting fruit will win you a multiplier of your total bet but if you miss, the old man will bang his staff on the ground and knock the remaining fruit off.

In this game the free spins are triggered by landing three of the Geisha scatter symbols on reels one, three and five. She will then twirl her umbrella to reveal a random symbol which will act as an extra scatter; then she will open her fan to reveal the number of spins you will receive.

It’s not possible to re-trigger the spins from within the feature.

There’s a gamble feature here which will let you double or quadruple your most recent win by correctly guessing whether the next card drawn is the correct colour or suit. Just click the ‘Gamble’ button below the reels if you fancy your chances.

If you’re the type of player who likes to gamble, take care here as it’s easy to tun down your bankroll by wagering every single win. Don’t gamble every win, just the odd one every now and again.

This slot looks great and the gameplay matches the looks – there’s nothing not to like about Ninja Fruits and the two bonus features offer some welcome variety.