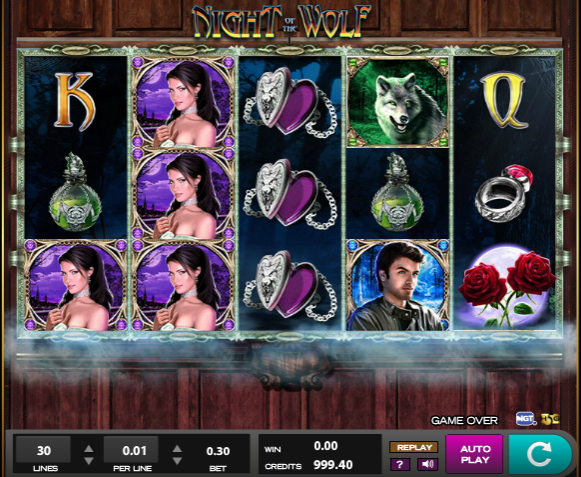 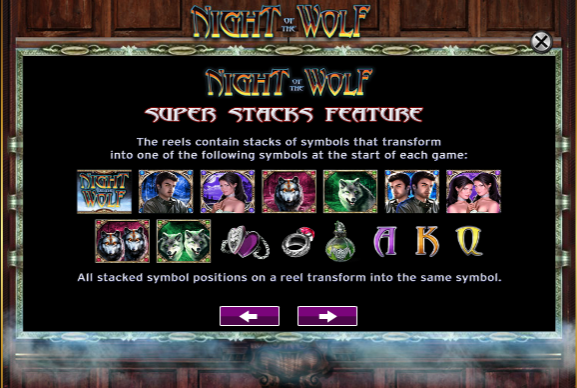 Funny things happen when there’s a full moon – cats start behaving oddly, backpackers party like the world’s about to end on a beach in Thailand and certain affected humans sprout hair and turn into werewolves; Night Of The Wolf is an online slot from IGT which focuses on the latter and it’s an atmospheric game with several bonus features – read all about it below.

Night Of The Wolf is a five reel slot with three rows and up to thirty paylines; there’s a dramatic soundtrack to the action and the reels click as they spin in quite a satisfying way. Wood panelling forms the backdrop to all the action.

The higher value symbols are all part of the narrative and include the main male and female characters, the two wolves into which they transform, a locket, a ring and a green potion; Q, K and A are the lower values.

The game’s logo is wild and will replace all others including the scatter which is represented by a red rose appearing on reels two, three, four and five.

Before each spin one symbols is picked which may then become stacked on the reels, occupying all positions there. Additionally you will notice that the high value symbol can be split into two; meaning that combos of up to 10 symbols are possible.

This is triggered by landing at least five of the red rose scatter symbols anywhere on reels two, three, four and five for which you will receive:

It’s not possible to retrigger any more free spins from within this round so when it’s over, it’s over.

Night Of The Wolf may seem a little bit dated compared to some newer slots but it’s worth checking out for the various bonus features and the atmospheric gameplay. It comes with an RTP of 94.90%.