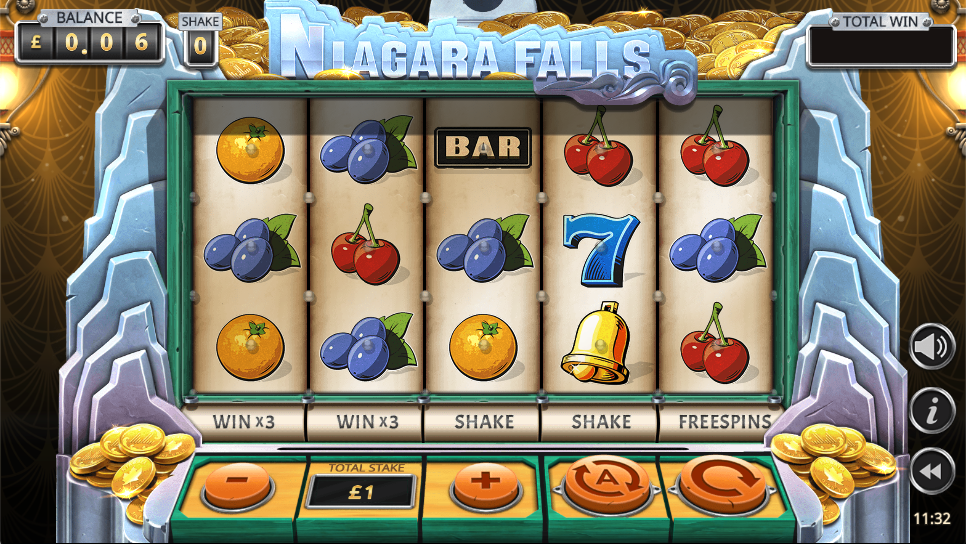 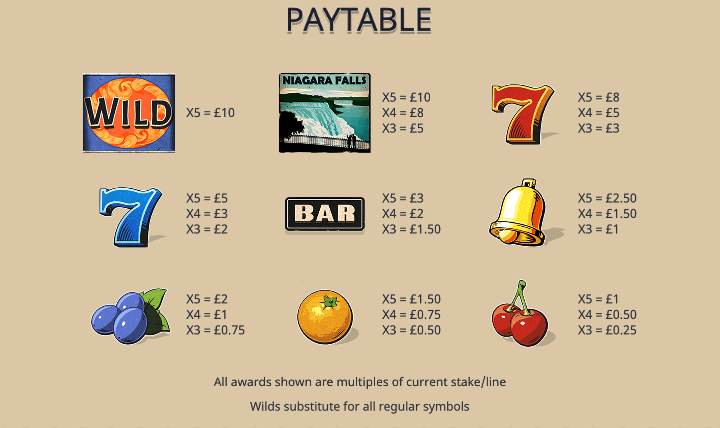 Niagara Falls may be one of the world’s great tourist attractions but in front of us here we have an online slot machine of the same name; it’s developed by Yggdrasil Gaming/Northern Lights and it’s packed with interesting, retro-style bonus features.

Niagara Falls is a five reel slot with three rows and twenty fixed paylines; we’re playing a physical machine shaped like a waterfall and it comes complete with authentic mechanical sounds reminiscent of a casino interior. Below each reel there’s another thin reel displaying a blank or a feature and at the top there’s a ‘Shake’ meter which we’ll explain shortly.

The symbols in play include the Niagara Falls logo along with some more traditional ones – red and blue sevens, bars, bells, plums, oranges and cherries. The wild is an orange and blue symbol which substitutes for all standard ones to help form winning combos while the barrel is the bonus symbol.

This can occur randomly at the end of each spin and a gold coin will appear which is placed in a slot above the reels – it will then drop down a pachinko-type board and land in one of the slots below the reels. If that slot displays a bonus then that feature is won and it will be one of the following:

This can also be triggered randomly after each spin and you’ll see a cascade of coins drop down the screen and collect as a prize in the slots at the bottom; if a Super Coin falls down it multiplies all wins that particular slot by 2x.

Collected ‘Shakes’ are used at the end of this feature to persuade a few more coins to drop down.

This is triggered by landing three of the bonus barrel symbols on reels one, three and five for a reward of five free spins; if the word ‘Wild’ appears beneath a reel then that reel will become completely wild until the end of the round. This round can’t be retriggered.

Niagara Falls may have a retro feel but it’s a great gaming experience and packed with clever features which make you want to keep playing; the authentic sound effects add to the fun of this highly recommended slot.