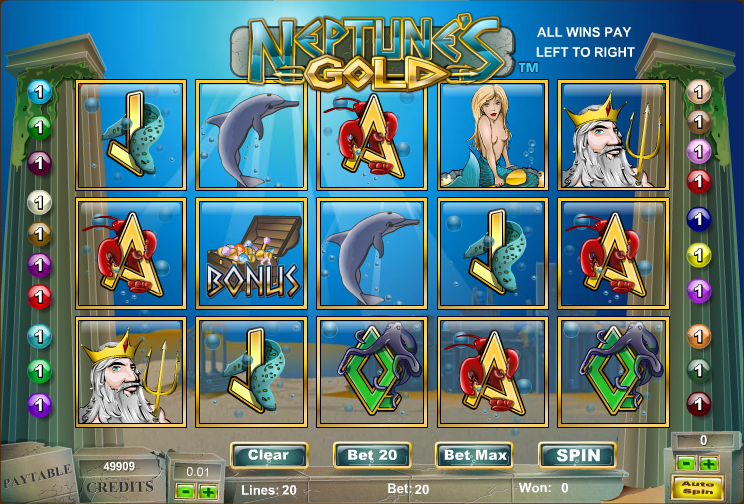 We’re diving deep beneath the ocean waves to check out this next online slot. It’s called Neptune’s Gold and it’s developed by Amaya gaming, one of the biggest software providers in the world. As all slots fans will know, Neptune was the Roman god of the sea and, to a lesser extent, horses but all the action here takes place in the briny depths.

Neptune’s Gold plays out over five reels and twenty paylines and the symbols are all in transparent boxes on the reels. Through those boxes we have a good view of the sea bed behind and it’s a scene littered with temple ruins and other broken architecture. Two columns frame the reels on either side.

The lower value symbols are the standard 10, J, Q, K and A but all are being hugged by fish and various crustaceans. We also have a seahorse, a dolphin, a scantily clad mermaid and Neptune himself.

The bonus symbols include a golden scatter, a pearl wild and treasure chest scatter which activates the main feature. When a wild contributes to a winning combination it will multiply that win by 2x. The golden scatter will payout even for two symbols on the reels.

To trigger the free spins bonus you will need to land three or more of the treasure chest scatter symbols anywhere on the reels. You will now get to play a brief mini-game to determine how many spins you receive and at what multiplier.

The spins will then start and hopefully you will be richly rewarded by the god of the sea. Check it out in the video below.

If you’re just going for the feature then you can minimise your paylines safe in the knowledge that the scatter symbols will still be active and the free spins have the same chance of being triggered.

There’s nothing much wrong with this slot but it is definitely a a little dated now; the graphics and the sound effects leave a bit to be desired but if you want to complete the list of games featuring gods then give it a go.