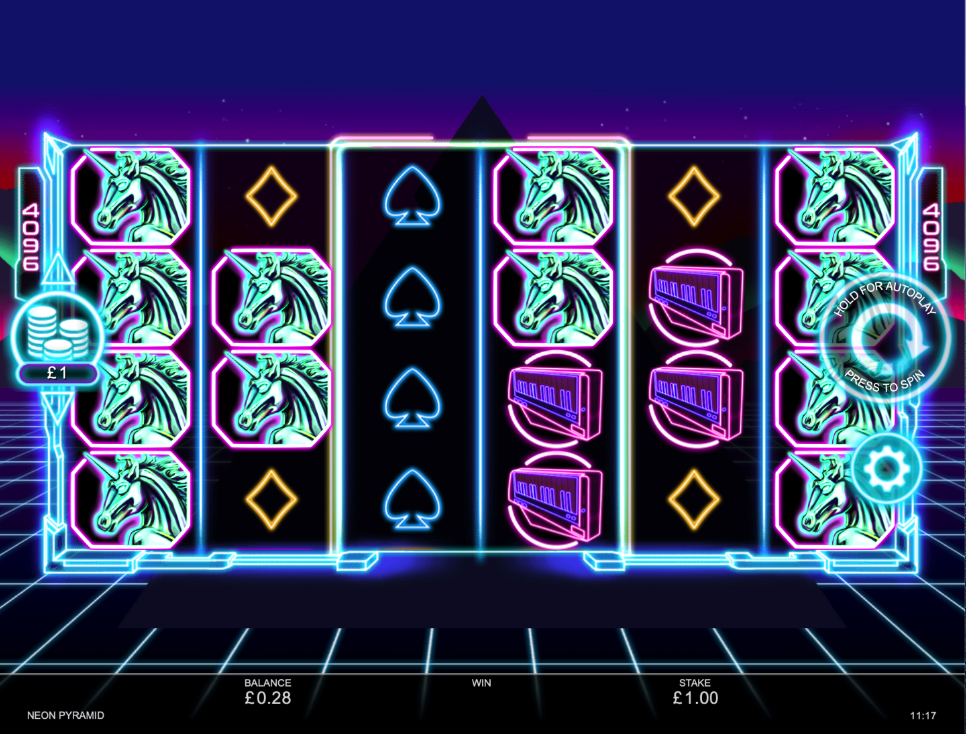 There’s definitely an 80s retro vibe to this online slot from Inspired Gaming which combines themes including music, futurism and fantasy; it’s called Neon Pyramid and from £0.20 per spin your task is to climb to the top of that pyramid for the biggest wins

Neon Pyramid is a six reel slot with four rows and 4096 ways to win; there’s a Tron-like feel to the design with a neon grid visible in the background which stretches away to the lights and hills in the distance.

High value symbols include the cassette, the sunglasses, the stereo, the keyboard, the posh car ( a DeLorean?) and a unicorn; neon playing card symbols represent the lower values. The arcade machine is wild, it appears only on reels three and four and it can display a multiplier which will be applied to any wins; the vaguely masonic pyramid is the bonus symbol.

The wild arcade machine only appears as a result of this feature but it’s three positions high and will be placed on reels three and four with a 3x multiplier attached.

Landing at least three, four, five or six of the pyramid bonus symbols anywhere in view will trigger this feature and you’ll enter the pyramid on levels one, two, three or four respectively. This first stage will determine how many free spins you’ll take to the main feature and the value of the wild multipliers:

If you can land more pyramids during the free spins the round will be retriggered and the starting point will be the next level up in the initial pyramid stage.

Neon Pyramid brings us an unusual theme and an interesting bonus feature and it’s certainly one of our favourite recent slots from Inspired Gaming; keep going until you trigger the free spins for the biggest wins!