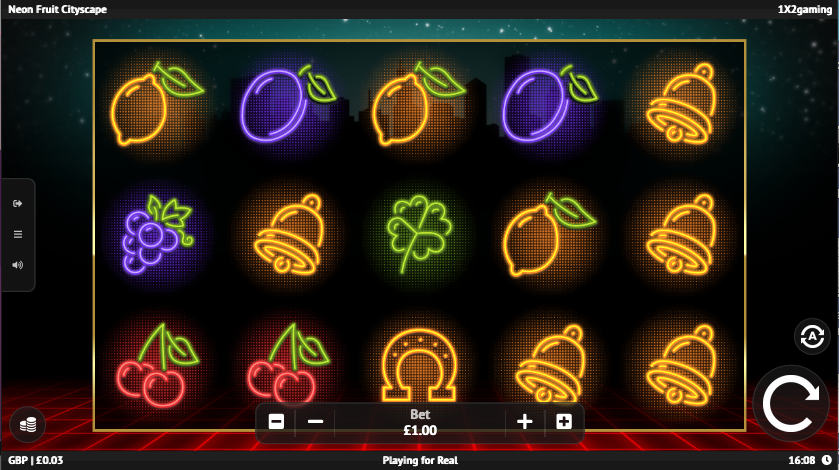 If you’ve previously enjoyed 1×2 Gaming’s Neon Fruit online slot machine then you’ll probably be pleased to learn that there’s now a sequel with five reels instead of three but still the same 90s nightclub vibe – it’s called Neon Fruit: Cityscape and it comes with free spins and wild multipliers.

Neon Fruit: Cityscape is a five reel slot with three rows and twenty fixed paylines; the original purple dancefloor/landscape backdrop is replaced by a red one here but the synthesizer music is thankfully still in evidence.

The blue and purple ‘Wild’ is wild and it will replace all standard symbols to help form winning combos; the red and orange ‘Free’ is the bonus symbol.

This is triggered by landing three, four or five of the neon Free symbols anywhere in view for which you will receive a tasty 10, 15 or 25 free spins; during this feature the standard wild symbol is replaced by a blue and purple ‘x2’ which will act as a wild but also multiply any wins to which it contributes by 2x.

These new wilds only appear on reels three, four and five but they cumulative which means that they are multiplied together (for a potential 8x) if more than one helps out with a win. The spins can’t be triggered.

If you liked the original then you’ll like this because it’s essentially the same game with the same design and bonus feature with two extra reels; give it a try, you might like it!