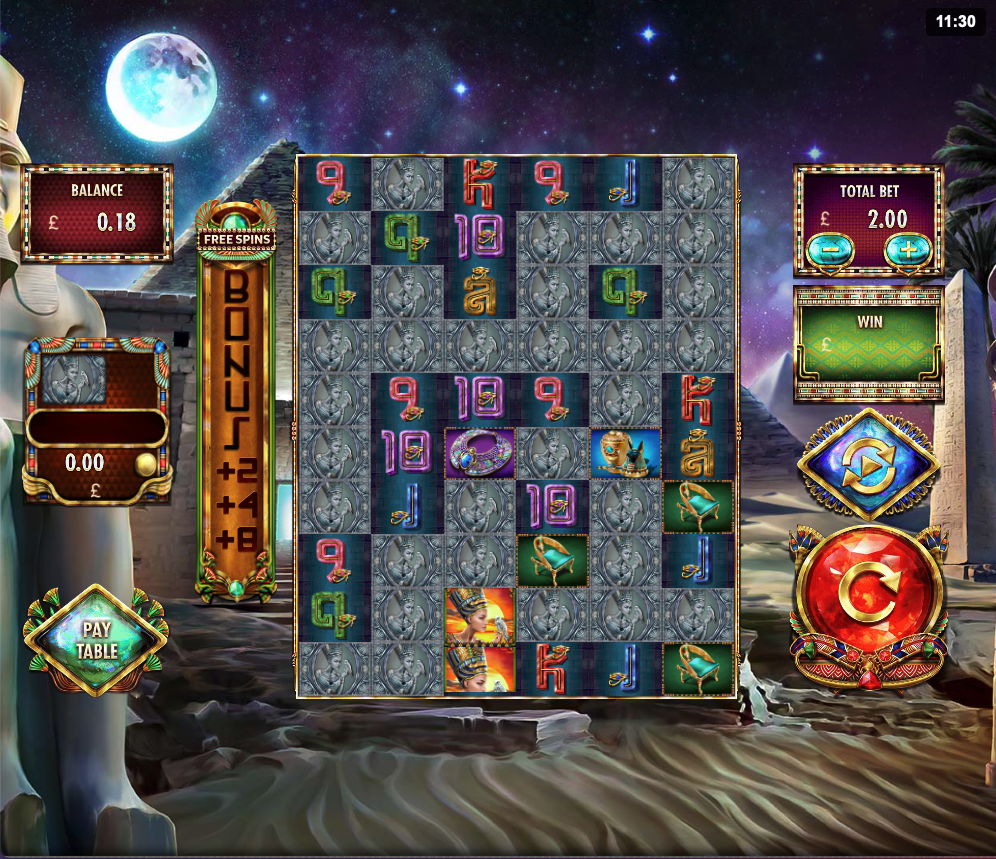 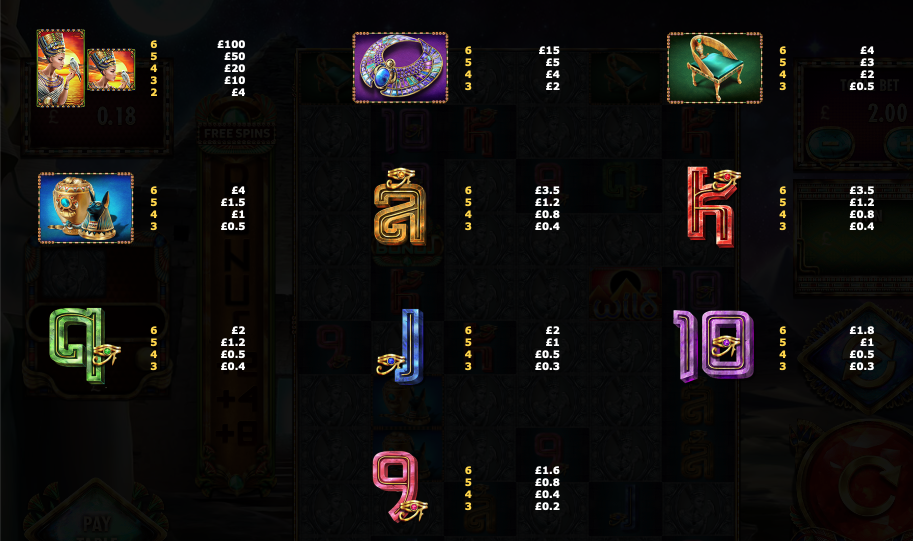 Online slots themed on Ancient Egypt are pretty common but we don’t see the legendary Queen Nefertiti that often on the reels; Nefertiti’s Riches is a release from Red Rake Gaming which comes with a massive one million paylines, collapsing reels, free spins and the Nefertiti minigame.

Nefertiti’s Riches is a six reel slot with ten rows and one million paylines; night has fallen over the pyramids in the background and the scene of sand, palm trees and statues is lit by a full moon and twinkling stars.

High value symbols include Nefertiti (who can appear stacked), a piece of neck jewellery, a golden chair and vase; 9, 10, J, Q, K and A make up the lower values; the pyramids are wild and the special symbol is the Bonus.

Every symbol in a winning combination will disappear and be replaced by more falling in from above, allowing the process to continue; each collapse will also light up the letters of the word BONUS to the left of the reels meaning that five, six, seven or eight collapses will award the initial free spins prize plus two, four or eight extra spins respectively.

The BONUS meter can also be lit by landing Bonus symbols on the reels and once the round is under way there’s an extra reel which will spin and award win multipliers and extra free spins.

In the unlikely event that you fail to win at least 16x the stake then an extra four spins will be awarded also.

On every non-winning spin the grey non-paying symbols on the reels will be totalled and added to the meter above the Pay Table button on the left hand side; filling this meter will trigger this feature which is played out on a reel set similar the one shown here:

The only symbols in play are hearts, keys, multipliers, green arrows and prize amounts – they’ll all lock in place and you’ll be trying to collect three of any of those symbols (except the cash amount) to fill up the meters above the reels for the following enhancements:

The round starts with three respins and each time one of the above symbols lands and locks in place the number of spins is reset to three.

Nefertiti’s Riches is similar in style and design to Million Dracula and Million 777 but that’s fine because they’re all top notch slots with clever bonus features and an unusual setup; we like them a lot!

Nefertiti’s Riches is an Egyptian-themed six reel slot with ten rows and one million paylines.

The Return To Player percentage for Nefertiti’s Riches is 95.30%.

How To Win On Nefertiti’s Riches?

Land at least three matching symbols or wilds starting from the left hand side; trigger the free spins or fill up the meter with non-winning symbols for Nefertiti’s minigame.

Where can I play Nefertiti’s Riches then?