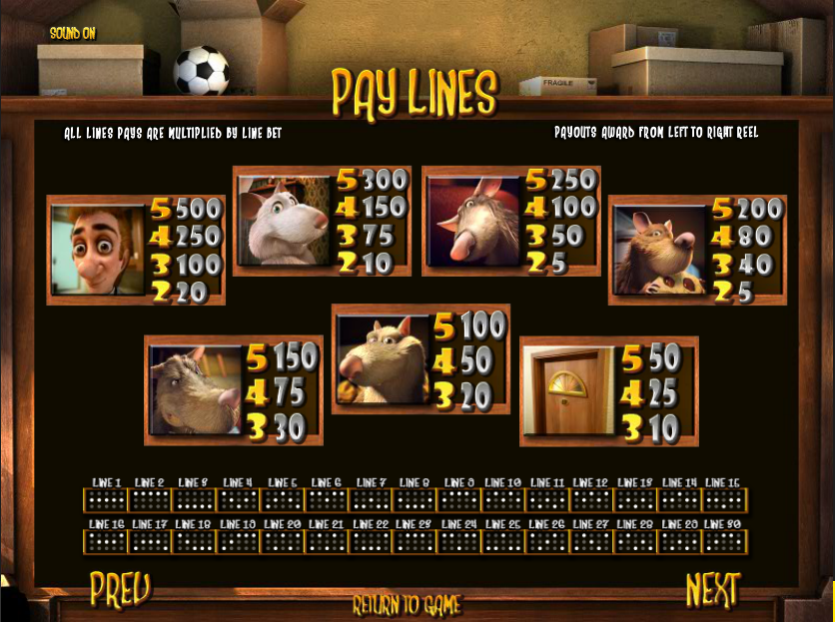 Do you know what murophobia is? Ned almost certainly does and he has no problem with it because he doesn’t have a fear of rats; Ned is the central character in this online slot called Ned and his Friends, it’s developed by Betsoft Gaming and Ned’s friends are a bunch of singing rats who live with him in his apartment. Read on for all the unlikely details.

Ned And His Friends is a five reel slot with three rows and up to thirty paylines; those reels spin in a large piece of shelved furniture in Ned’s apartment while Ned himself relaxes in a red armchair in the bottom left hand corner.

The symbols are all related to the theme and they include Ned, five different rats and the front door of the apartment.

There’s no wild symbol in this game but there are various bonus icons including some singing rats, a rat hole and Ned’s girlfriend.

This is triggered by landing three or more of the singing rats symbols anywhere in view and you will receive between five & fifteen free spins for your troubles. When the spins get underway the rats start singing in a sort of horrendous, squeaky, barber shop quartet style which actually makes you want the spins to end. If you’re unlucky you’ll trigger more spins by landing three more scatter symbols and the ‘singing’ will continue.

Trigger this by landing three or more of the rat hole symbols anywhere in view and all you need to do is click one of the rat tails poking out of the hole for a cash prize.

This is triggered by landing three or more of the girlfriend scatter symbols anywhere on the reels; she apparently hates rats and faints when she sees them – you must then pick rats to sing songs to her and earn cash until she wakes up at which point the round is over.

Ned And His Friends is a superb slot with an interesting theme and some great quality graphics; the bonus features are creative and it’s well worth checking out but you may want to mute those rats when they start singing.