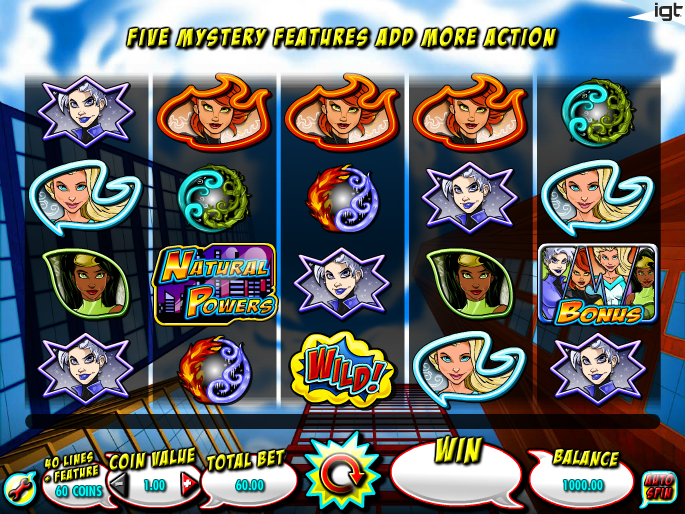 IGT’s latest online slot is a superhero-themed affair which features four young ladies all equipped with weather-related powers. It’s called Natural Powers and it’s full of enough added extras to keep most players busy.  Not only does it include a free spins bonus game, it also has several randomly triggered base game features as well as cascading reels.

Natural Powers is a five reel slot with four rows and forty fixed paylines; there’s a cartoon design to the game and behind the reels there’s an ant’s eye view of skyscrapers underneath a blue sky.

There are seven base game symbols including wind/earth, fire/ice, the four main female characters and the Natural Powers logo.

The wild symbol is a Batman-esque ‘Wild!’ and the bonus icon features all four girls.

Always one of our favourites, every time you land a win those winning symbols disappear, allowing more to drop in from the top of the screen. New winning combos can now be made and this continues until no more wins are possible. Think of it as a free spin each time you win.

This is where the ladies come in handy and this feature may occur after any spin in the base game. Each one – wind, fire, earth and ice – causes a different action as follows:

The spins are triggered by landing the bonus symbol anywhere on reels one, three and five. If you land two, you may be lucky and see all four girls appearing to complete the set.

Now choose one of the following free spins selections:

Before each spin the multiplier will be randomly chosen within the specified range.

Statistically we think it’s best to opt for Wind when choosing the free spins option but of course the choice is yours.

Natural Powers is good stuff, a highly enjoyable gaming experience with lots of bonus features including those cascading reels. If there’s a downside it’s the slightly low RTP of 92.61%-96.47%.