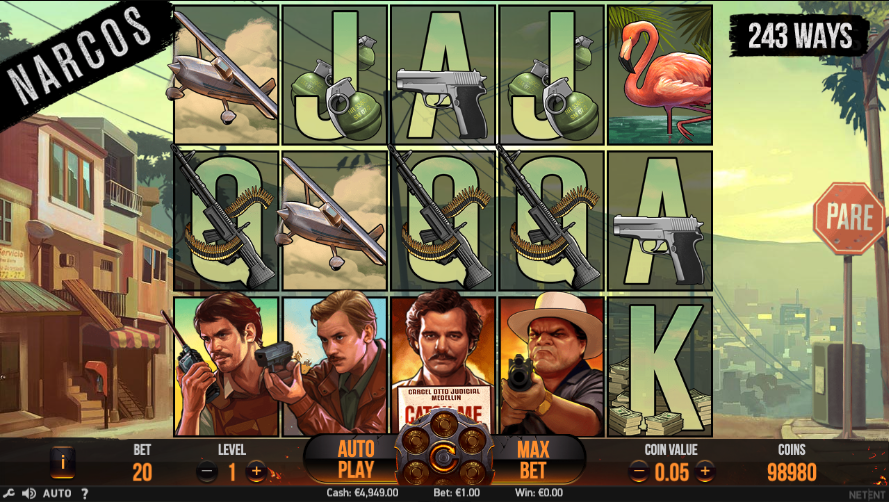 Blasting its way onto your screen this fine day is this drug-fuelled online slot machine based on the criminal empire of the notorious Pablo Escobar; it’s called Narcos and it comes with all your favourite characters from the TV show of the same name.

Narcos is a five reel slot with three rows and two hundred and forty three ways to win; there’s a Mexican guitar soundtrack to the action which takes place on transparent reels through which we can see a dusty, crime-ridden city underneath the hot sun.

The six high value symbols include four characters (good and bad) from the television show plus  flamingo and a small aircraft; J, Q, K and A, accessorised with weapons and money, represent the lower values.

The DEA badge is wild and it will replace all standard symbols to help form winning combinations – it also has a bonus feature attached which is explained below. The Catch Me and Free Spins symbols are the scatters.

If a wild symbol is part of a winning combination in the base game or free spins it will remain on the reels and move one place to the left with each spin.

This can occur randomly during the base game and some of the higher value symbols in view will be transformed into wilds as the bullets fly onto the reels.

This is triggered whenever at least three Locked Up symbols appear on the same row during the base game; they will now move together and the reel set will change into one with only Locked Up and Golden Locked Up symbols.

The original cluster will remain in place and you’ll receive three free spins with which to add to that cluster (at least three symbols horizontally or vertically) or create a new cluster which will reset the spins to three again. Each symbol has a multiplier value attached and when the round is over those values are totalled and applied to your total stake.

Trigger this by landing three of the Free Spins scatter symbols anywhere on reels one, three and five for which you will receive an initial ten free spins; on each spin one or more of the high value symbols may become a Walking Wild and if there any of these wilds left on the reels when the spins end, you’ll receive more spins until they’ve dropped off the left hand side.

Narcos is another exciting and high quality slot from Netent – there are some clever bonus features, a great soundtrack and it all fits in well with the atmosphere of the TV show. Highly recommended!