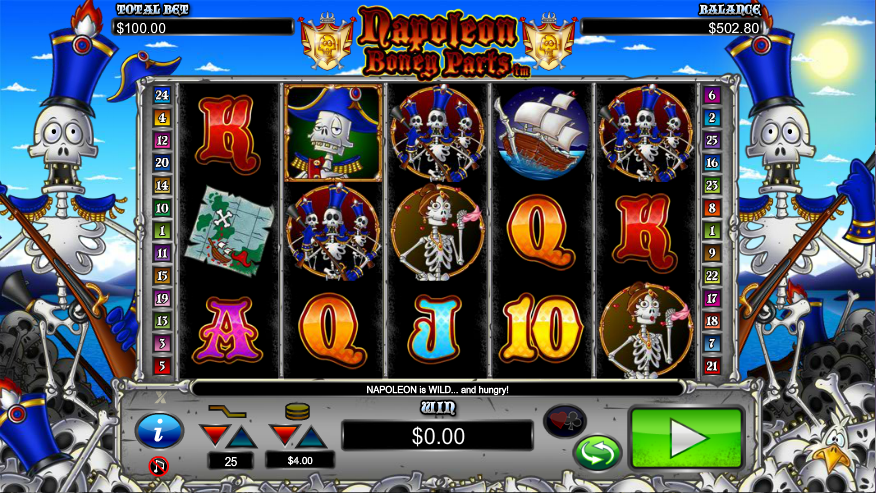 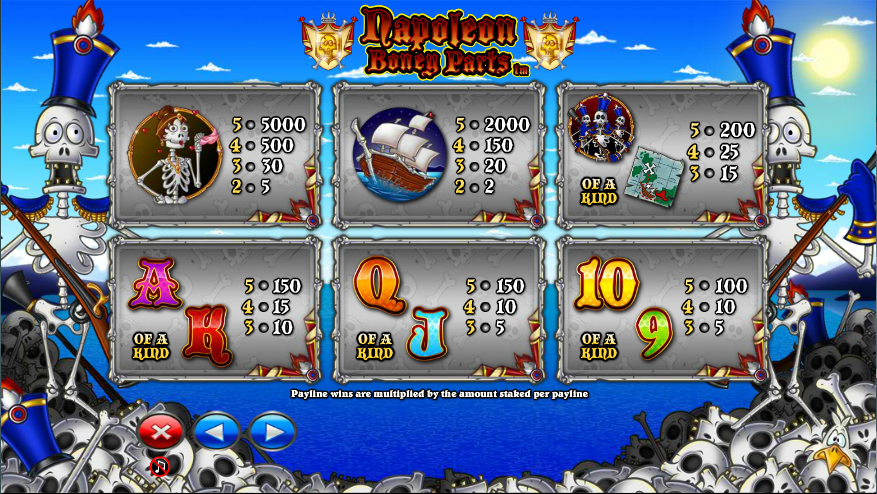 Perhaps France’s greatest ever military leader, Napoleon Bonaparte has now been immortalised in an online slot which skews his name slightly but at least provides us with an amusing game. It’s developed by Nextgen Gaming and it includes two extra features as well as an opportunity to gamble your winnings.

Napoleon Boney Parts is a five reel slot with three rows and up to twenty five paylines; of course the theme here is that Napoleon and his army are all a bunch of skeletons. Two skeletal sentries stand on either side of the reels looking faintly embarrassed.

There are four high value symbols including one of his two wives, a ship, a troop of skeleton soldiers and a map; 9, 10, J, Q, K and A represent the lower values.

Napoleon himself is wild, appears on reels two, three and four and will replace all others except the scatter – that’s a golden emblem which activates one of the main features.

This is triggered by landing three wild symbol on the reels at the same time; you now get to play an amusing game in which Napoleon stands in the centre of the screen and you get three picks to remove a bone. Each bone is worth a cash prize you’ll get an extra amount if you can get him to fall over.

Trigger this by landing three or more of the golden emblem scatter symbols anywhere in view for which you will receive ten free spins. All wins are subject to a 2x multiplier and the spins can be retriggered by landing more scatters; additionally the Boney Parts game can be triggered from here.

Any win can be gambled by clicking the hearts/clubs button below the reels; you can now try and double or quadruple that amount by guessing the next colour/suit to be drawn. A wrong guess loses it all.

Napoleon Boney Parts is one of the more amusing games we’ve played and it comes highly recommended; the features are welcome, especially the Boney Parts game and it comes with an RTP of 95.01%.