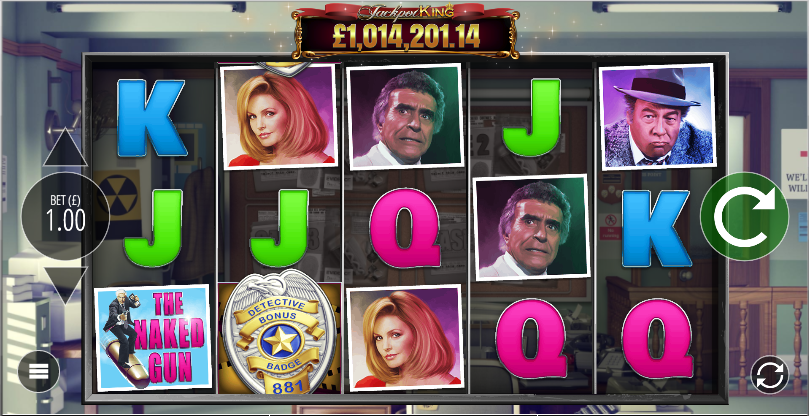 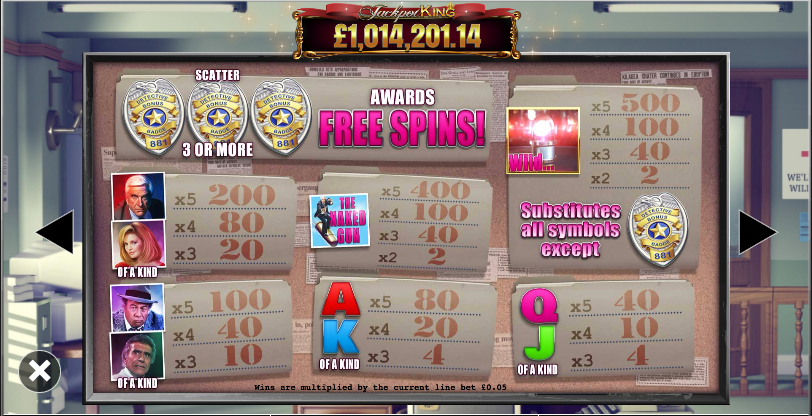 Movie fans will no doubt be aware that the classic Leslie Neilsen comedy The Naked Gun is based on the equally funny Police Squad television show; it’s now also the focus of an online slot machine from Blueprint Gaming complete with film sound effects, free spins and a progressive jackpot – read all about it here.

The Naked Gun is a five reel slot with three rows and twenty fixed paylines; through the transparent reels we can just about make out the offices of Police Squad with flickering strip lights and cluttered desks.

The wild symbol is the flashing police car light which will replace all others to from winning combos except for the detective badge scatter. 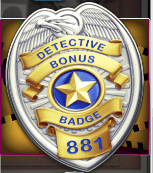 Trigger this by landing three, four or five of the detective badge scatter symbols anywhere in view to reach one of the following:

Triggering the feature with three or four scatters also offers you the chance to play a picking round to try and gamble and get a better free spins option. There’s an extra option between Stake Out and Crime scene called On The Edge Free Spins which awards 10 free spins with Expanding Roaming Wilds.

If you choose to gamble and lose there’s a cash prize consolation.

The Naked Gun is a slot with lots to offer and a fitting tribute to one of the classic comedies of the 1980s; the ability to gamble your free spins is a nice touch and then there’s the lure of the progressive jackpot also – it comes with an RTP of 93.57%