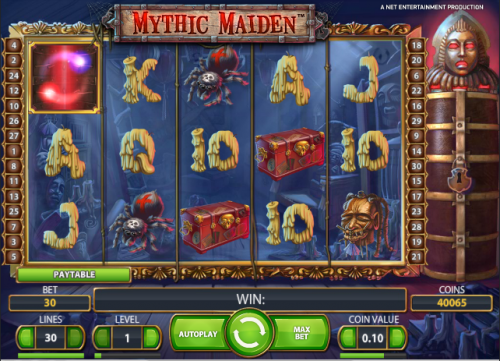 Creepy sounds, big hairy spiders, freaky skulls and any number of ghoulish features; this is Mythic Maiden from Net Entertainment and it’s an online slot machine which combines scares, humour and great graphics to make a winning combination.

It’s a fairly standard five reel and thirty payline game with a cool bonus game; the reels are set against a backdrop of large spiders, melting candles and other creepy accessories and the reels themselves are a window into a dusty room filled with scary items.  The background sound effect are appropriately creepy and dramatic.

10, J, Q, K and A make up the low value symbols but they’re all carved out of wax; the higher value symbols are a red chest, a large, black spider, a skeletal hand holding a book, a skull with fangs and a shrunken head.  The scatter symbol is pretty, rotating orbs while the wild is a creepy moon viewed through a broken window.

This is really the only bonus feature in the game but it’s pretty profitable when you land it.  It’s triggered by landing three, four or five of the scatter symbols which will earn you 10, 15 or 30 spins respectively.

During the free spins round the iron maiden makes an appearance and after each spin this horrendous medieval torture machine will give you a multiplier up to 10x (which applies to the current spin) and up to 2 extra spins.  This often means that your original number of spins is extended by several, giving you more chances to win.

During the free spins, landing three or more scatters can win re-trigger the round.

As a minor bonus, each time you land a winning combination which includes the moon wild symbol the win will be subject to a 3x multiplier.

This a fantastically ghoulish but humourous slot from a company which rarely fails to hit the mark; you can wait until Halloween to play this game but why not give it a go now – you won’t be disappointed.