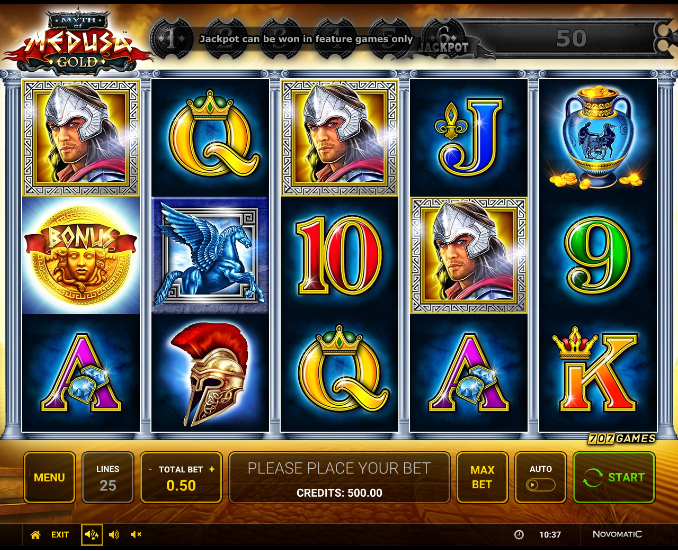 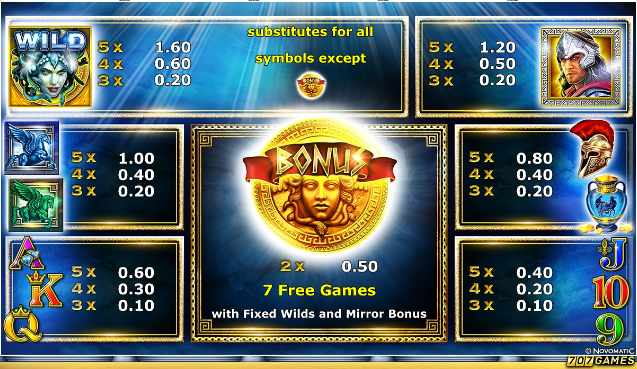 As all online slots fans will be aware, Medusa was one of the Gorgons from Greek mythology with snakes for hair and a face which could turn onlookers to stone; she clearly deserves her own game and here it is – Myth of Medusa Gold from Novomatic.

Myth of Medusa Gold is a five reel slot with three rows and twenty five fixed paylines; those reels spin within stone pillars against a backdrop we can’t quite make out but it looks hot.

The high value symbols include Perseus (who eventually defeated Perseus) Pegasus in blue and green, Perseus’ helmet and a gold-tinged vase; 9, 10, J, Q, K and A make up the lower values.

Medusa is wild and she’ll replace all standard symbols to help form winning combinations; the golden ‘Bonus’ is the scatter symbol which appears only on reels one and five.

Also during the free spins look out for the golden question mark landing anywhere to trigger the Mirror Bonus – this symbol will randomly select one of the standard symbols and then fill all positions on reels two to four with that symbol, making a big win likely especially since there’ll be wilds locked in place on reels one and five.

And that’s not all because there are also Jackpot symbols in play here which will increment the meter above the reels each time they land – fill that reel and win 100x your stake.

Myth of Medusa Gold is a slot which revolves around the free spins – trigger that and it’s a bonus full of extra features with the potential to land big wins throughout.