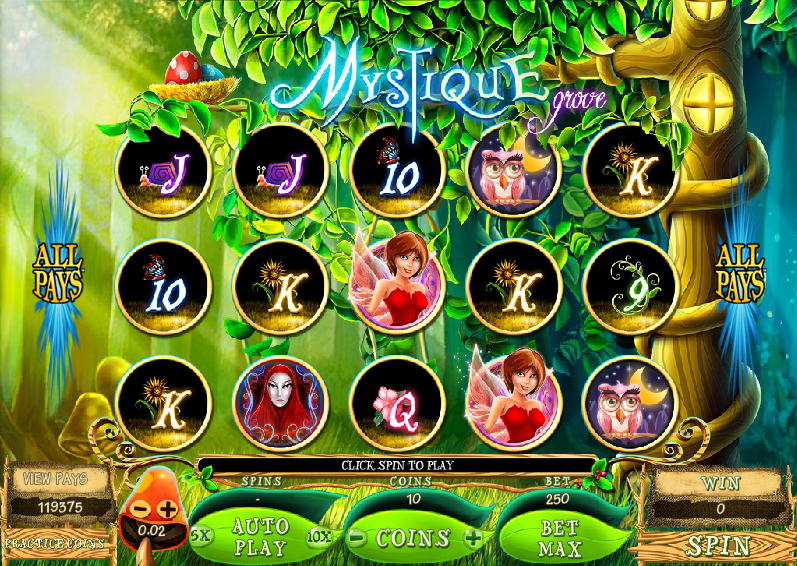 Mystique Grove features five reels and 243 ways to win and it looks absolutely lovely; each symbol on the reels is a circle floating in mid-air underneath the branches of a tree.  That tree is home to creatures of some sort as we can see from the windows near the top of the trunk. A red and white spotted egg sits in a nest on the end of the biggest branch.

Mystique Grove is a an online slot from Microgaming which a worthy addition to a genre of mystical games which feature fairies, cute animals and enchanted forests.  It’s also a genre which offers plenty of scope for creative visuals and it’s a chance for the designers to go to town in a fantasy world where pretty much anything is possible.

An array of mystical characters are the main symbols and these include a pink owl, a red-headed witch and two fairies dressed in red and green. Less valuable symbols are 9, 10, J, Q K and A but decorated with a delicately drawn flower or small creature.  The games logo acts as the scatter symbol and there’s a wild which features that red and white egg in it’s nest.

Although this slot looks like it should have a creative variety of bonus features, it in fact has just the one.  It’s not a free spins round which may be a refreshing change for some and you can trigger it by landing three or more of the Mystique Grove scatter symbols anywhere on the reels.

You will now be taken to a screen which displays fifteen different flowers and you must start picking them; cash prizes are underneath most flowers but when you reveal the ‘Collect’, that’s the end of the game and you head back to the base game with the prizes collected so far.

You can’t choose the number of paylines in this game but there are 243 ways to win which means you can win with symbols combinations which are not on the standard paylines.  It’s only necessary for the symbols to be in adjacent reels starting from the left hand side.

This game looks lovely, has an appropriately twinkly soundtrack and is a worthy addition to a high quality genre; more bonus features would be nice but it’s good fun nonetheless.