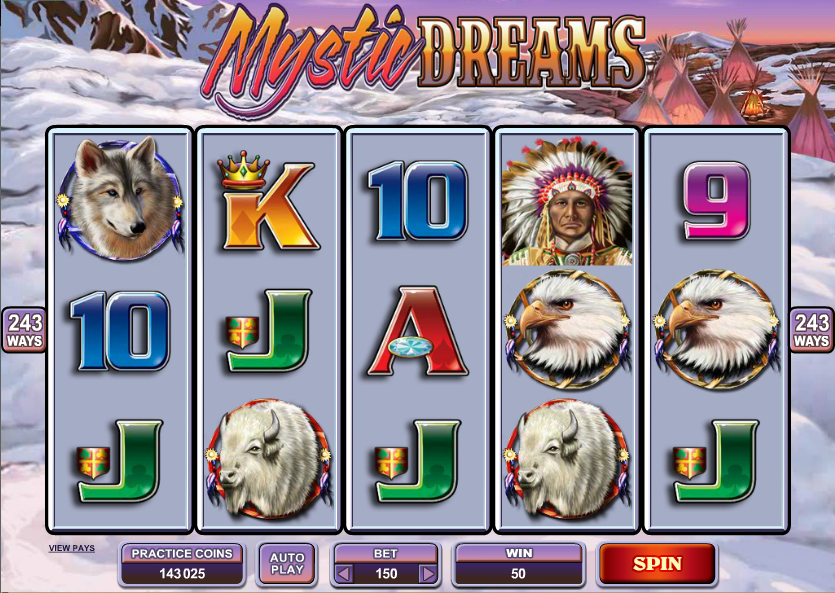 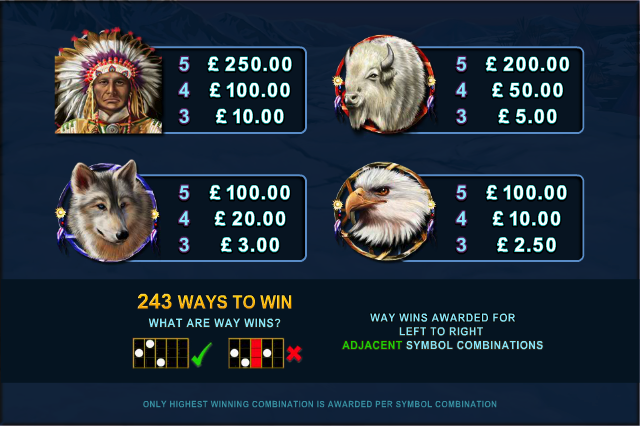 Mystic Dreams from Microgaming is the first online slot machine we’ve encountered based on the world and the lore of the native American Indian; it’s impossible to squeeze centuries of stories and myths into one simple slot but this game plays well and should keep you coming back for more.

The backdrop to Mystic Dreams is a mountainous and snowy scene containing a number of tepees.  The low value symbols are standard playing cards (9, 10, J, Q, K and A) but the more valuable ones are an eagle, a wolf, a buffalo and a warrior in an impressive headdress. A tepee is the wild symbol and the bonus symbol is the summit of a totem pole.  The background music is a haunting guitar track.

Landing three, four or five of the totem pole symbols on subsequent reels (and beginning on reel one) will award 10, 15 or 20 free spins.  During the free spins round what you want to see are the tepee symbols appearing on reels two, three and four and completing a winning line. You’ll receive the following:

But wait!  It get’s better – if you can land two or three wilds in the same spin the multiplier will be worth the sum of them multiplied.  So two wilds would be worth 2 x 3 (6x) while three wilds are worth an impressive 2 x 3 x 4 (24x).

More free spins can be activated in the bonus round by landing three or more totem pole symbols.

Microgaming’s 243 Ways To Win does away with the usual payline structure of many slot machines and the result is that you can make winning combos just be having matching symbols in subsequent reels – they don’t need to be part of a pre-defined payline.

You generally know that you’re getting with Microgaming slots and that’s true here; Mystic Dreams is a well-presented slot with a nice bonus game, some great animated symbols and an RTP of 96.06%.