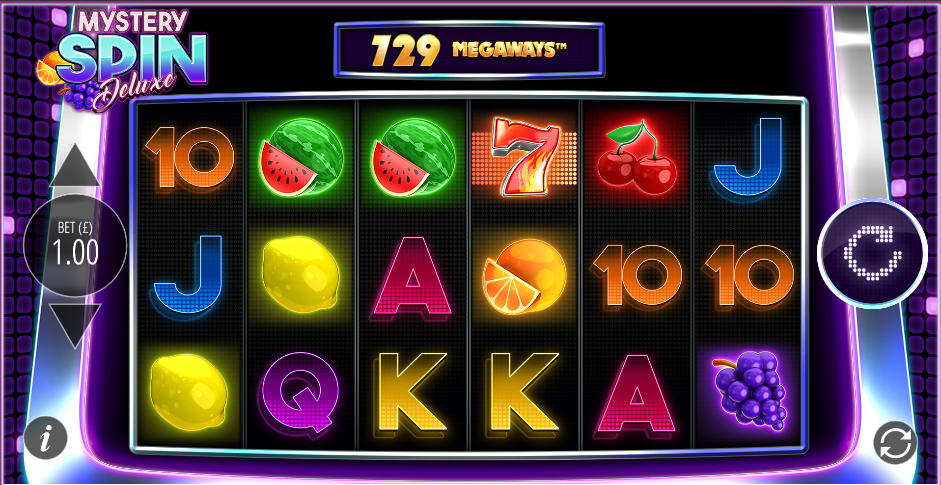 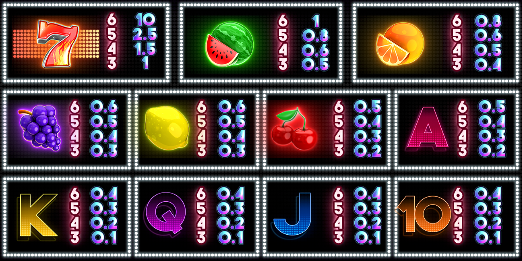 If you’re looking for an online slot machine with an unfeasible number of paylines then why not check out Mystery Spin Deluxe Megaways from Blueprint Gaming; it uses Big Time Gaming’s proprietary Megaways feature to create the potential for 117649 paylines – find out how it all works below.

Mystery Spin Deluxe Megaways is a six reel slot with five rows and a possible 117640 paylines, an amount made possible by having up to seven symbols in view on each reel. Unlike other Megaways slots however the reels all display the same number of rows on any given spin which means that the paylines are fixed to 729, 4096, 15625, 46656 or 117649.

There are some familiar symbols on show here and they include a burning seven, a watermelon, oranges, grapes, lemons, cherries and then 10, J, Q, K and A as the lower values.

The wild symbol is a big ‘Wild’ on a pixelated blue background and it will replace all others to help form winning combos except for the Mystery Symbol.

This can occur on any spin and you will see up to six reels (all of them in fact) lock together and result in matching symbols when they land, hopefully resulting in a nice, big win.

On any spin at least one Mystery Symbol might appear and when the reels stop spinning they will transform into matching symbols; this may not result in a win but on the other hand it just might!

Compared to some other Megaways slots, Mystery Spin Deluxe is a little lacking in features such as collapsing reels and free spins; it’s Ok however and if you ever appreciated the synced reel game mechanics in games such as Net Ent’s Twin Spin then you’ll enjoy this.