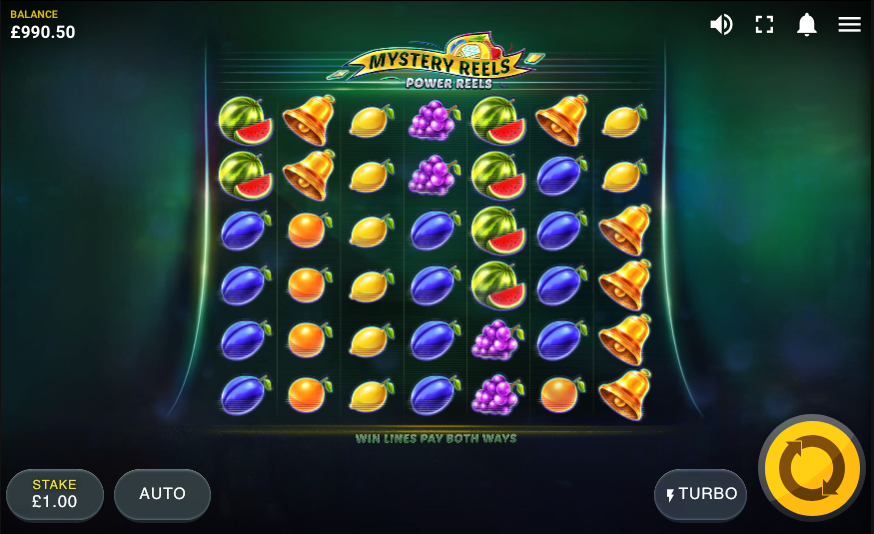 Joipn us now as we take a trip into a world filled with mystery and power as we check out this online slot machine from Red Tiger Gaming; it’s name is Mystery Reels Power Reels and presumably it’s mystery is surpassed only by its power, or perhaps the other way around – either way there are loads of reels and lots of opportunites to win.

Mystery Reels Power Reels is a seven reel slot with seven rows and thirty fixed paylines although in this game winning combinations can be formed both ways so those thirty paylines are really sixty. There’s a hazy green countenance to the gameplay which does give it a kind of mysterious glow.

Along with the fiery red seven and the golden bell there’s a veritable fruit salad of symbols on show including watermelons, bunches of grapes, plums, oranges, lemons and cherries.

The wild symbol is a huge diamond which will substitute for all standard symbols to form winning matches; it’s also the most valulable symbol and worth 5250x the stake for seven on a payline. The golden apple is the Mystery Symbol which we’ll explain below.

The Mystery Symbol is in fact the only extra feature in this game and it’s triggered each time the golden apple lands on the reels; this is a large, 2×2 symbol which will clone itself a random number of time after appearing before transforming into a matching symbol, hopefully resulting in a nice win.

Seven reels may or may not be the next phase of slots evolution but there’s nothing wrong with a bit of experimentation; Mystery Reels Power Reels is fun in an action packed and colourful way and there should be woms big wins hiding behind the golden apple.