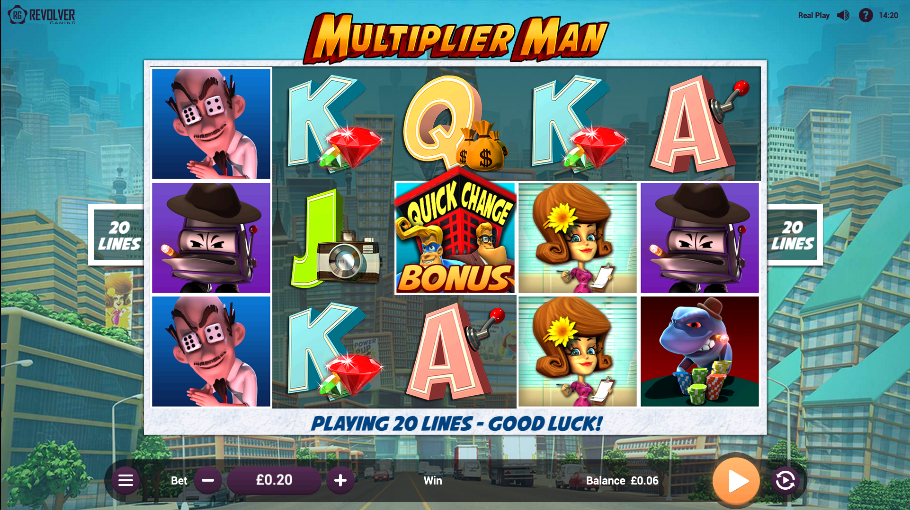 If you’re after a superhero who probably won’t ever get signed up to Marvel’s roster of crimefighters then look no further than Multiplier Man – he’s the theme of this online slot from Revolver Gaming and although he can get changed very fast, we’re not sure what else he can offer….

Multiplier Man is a five reel slot with three rows and twenty fixed paylines; those neat reels spin against a backdrop of an equally neat cityscape composed of glass and steel and stretching back into the lofty distance.

The higher value symbols include the Multiplier Man logo, three villainous-looking characters from this story, the girl with the sunflower in her hair and the superdog; 10, J, Q, K and A represent the lower values.

There’s a standard wild symbol on reels one, three and five but an alter ego wild on reels two and four which will expand to fill all positions there; the bonus symbols are the Free Spins and Quick Change icons.

This is triggered by landing three, four or five of the Free Spins scatter symbols anywhere in view for which you will be awarded 8, 14 or 20 free spins; all wild symbols are stacked three positions high during this round and they’ll be nudged fully into view if they’re only partially visible.

Trigger this by landing at least three of the Quick Change bonus symbols anywhere in view and you’ll win a starting amount which can then be increased by playing a Hi/Lo game to earn larger multiplier values.

This can occur at random during the base game and free spins and an X-ray will inspect the contents of a safe to reveal a multiplier value which will be applied to that particular win.

Multiplier Man is a slot with plenty of cartoonish colour and clarity and, alliteration aside, it’s good fun as well with several clever bonus features and some cute characters to enjoy.