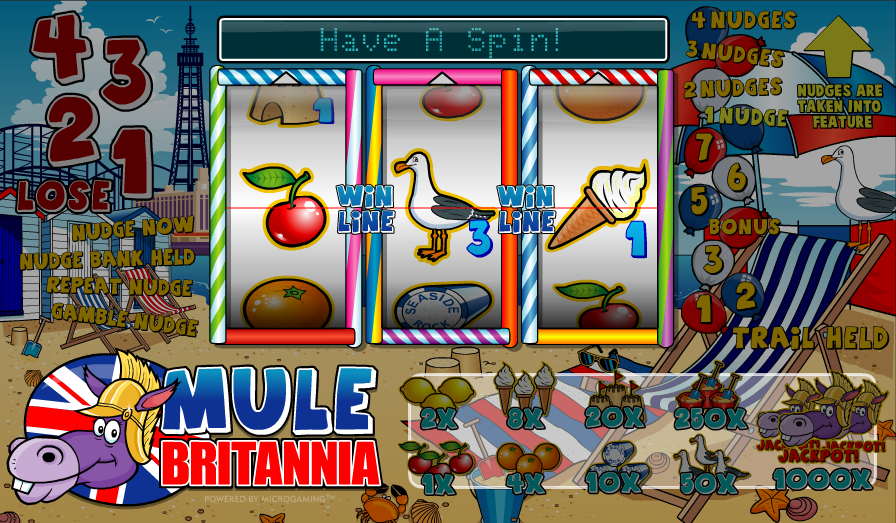 Deck chairs, seagulls and beach huts – this must be a British beach. Only the blue sky gives away the fact that some artistic license has been used here. This is Mule Britannia, a UK-style online slot from Microgaming which celebrates the great British seaside holiday and squeezes in a load of bonus features into the bargain.

Mule Britannia is a three reel and single payline slot set against a packed beach scene background; many of the symbols are theme-related and include ice creams, sticks of rock, a sandcastle, buckets and spades, seagulls and good old donkey.

As with many of these fruit machine-style games, the fun is not really to be had in the base game, it’s in trying to activate the entertaining feature. You will see a trail to the right of the reels and some of the symbols have small numbers attached to them; these numbers will help you to climb the trail if they land on the payline.

When the trail reaches the nudges, you will enter the bonus game and you can see the layout on the screenshot below. The number of nudges you reached on the trail determines you’re starting position on the right hand column and you can gamble your way up to win more more money.

When you reach the a little red arrow between the columns, you can swap if you would prefer a multiplier or one of the features on the left hand side. As soon as you lose, the game is over.

The trail also contains a bonus spot on the fourth step which will give the player extra goodies such as more numbers of a random position higher up. 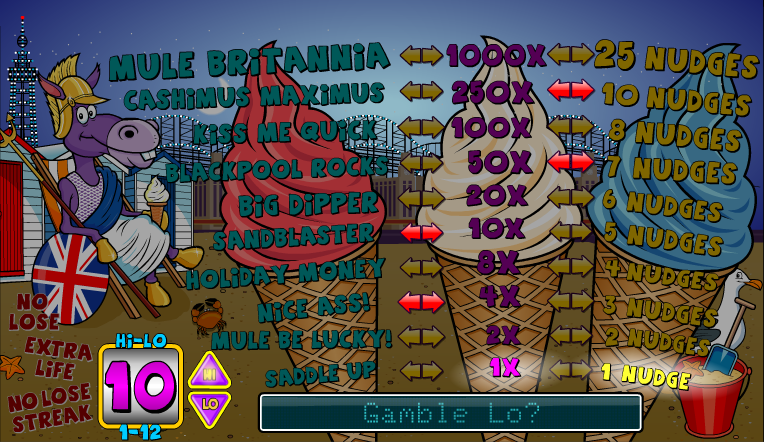 Nudges are randomly awarded and permit the player to jog single reels down to try and collect numbers or make winning combinations. They may also be banked, repeated or gambled occasionally.

Holds allow the player to freeze one or more reels with a similar purpose as described above.

This is awarded randomly and the reels will slowly spin, allowing the player to hold reels in the appropriate places; this is handy when you’re trying to collect those valuable numbers but it will very rarely allow you to make a winning combo.

All the advice here is about getting those numbers to reach the feature; use the nudges and holds wisely and it’s often worth stopping at the bonus marker rather than holding that extra reel. Additionally, don’t try to progress too far in the feature, the hi/lo gamble will get you in the end.

This is a brilliant slot – good graphics, some seaside sound effects and a bucket load of bonus features always make for top quality entertainment. You will just want to keep on spinning.