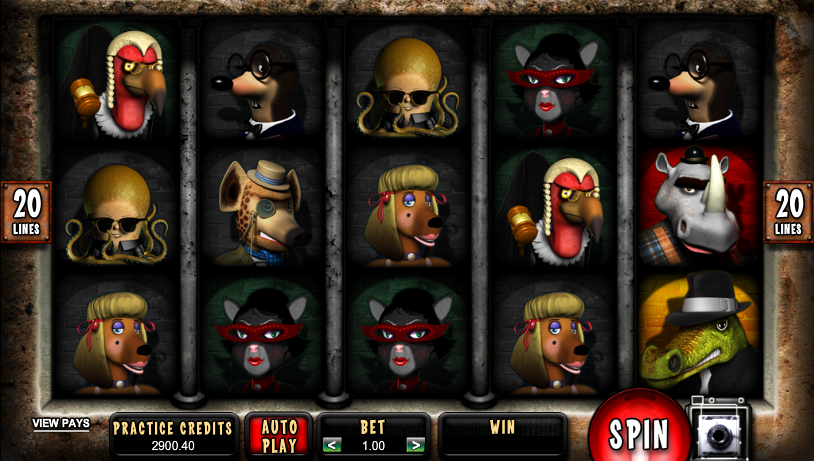 It’s late, it’s dark and we are currently visiting the 13th Precinct in an unnamed city; Microgaming’s release, Mugshot Madness, is a strange but compelling online slot centred around a range of criminals and the quest to catch them.

The difference in this slot is that all the criminals are animals – and odd-looking ones at that.  The reels spin between the bars of a cell which is a clever feature and the backdrop to the game is the big, stone-built police station.  There are five reels and twenty paylines.

There are no playing card symbols in this game and every one is a character with the exception of the scatter symbol which is a police badge.  So from low to high value we have an octopus, a horse in a blonde wig, a monkey, a mole, a hyena, a cat, a vulture (the judge), a rhinoceros, a fox, an alligator and a dog (Detective Jack Murphy).  Jack Murphy is the wild symbol.

If you can lend the Detective wild card as part of a winning combination, your win will be subject to a 2x multiplier.

This is the main bonus game and it includes some nice features which differentiate it from other bonus rounds.

You can trigger it by landing three, four or five of the police badge symbols anywhere on the reels in standard gameplay and for this you will receive 15, 20 or 25 free spins. During the free spins the aim is to capture criminals by including them in winning combinations.

Once a criminal is caught their symbol turns into a black and white mugshot version and remains that way for the duration of the bonus round.  Multipliers are awarded each time a criminal is captured.  The lower value characters are easier to catch than the higher value ones and are therefore worth a higher multiplier – up to 10x in the case of the alligator.

It’s an unusual slot but we like it; your eyes may need to get used to the slightly gloomy environment but that’s all part of the underworld vibe.  Give it a go – it’s good fun.