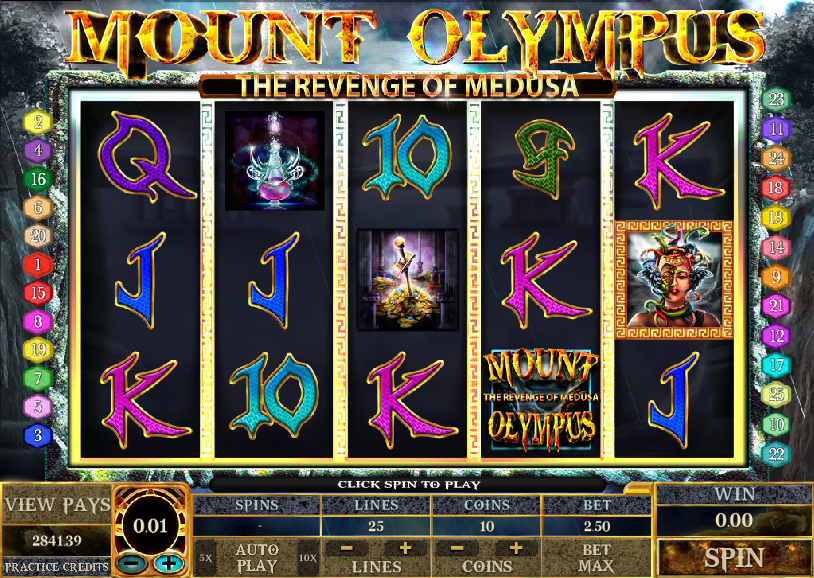 There are several strong themes which run through the world of online slots and one of those genres is Greek gods and legends; it provides loads of scope for exciting graphics and there’s wealth of story-lines available n which to base a narrative.  Microgaming have come up with the goods here with a game based on the snake-haired Medusa – look at her directly and you’d turn to stone.

Mount Olympus contains five reels and twenty five paylines and the background to the reels is a rocky, rain-soaked scene, perhaps the location of Medusa’s lair.  The main symbols include the sword that Perseus used to eventually slay Medusa, her powerful eye and Medusa herself; the lower value symbols are 9, 10, J, Q, K and A.

The game’s logo is the scatter symbol which triggers the bonus feature and the wild symbol says ‘Wild’ in big, ornate letters.

Mount Olympus features a free spins round which includes a nice extra related to Medusa but first you’ll have to trigger the feature by landing three, four or five of the scatter symbols anywhere on the reels.

You’ll only get five free spins but before each spin you’ll be shown a row of Medusas; pick one and she will reveal how many reels will be frozen for the next spin. Only reels two to five can be frozen and those reels will become completely wild.

Big wins are obviously available if you can manage to turn reels two to five totally wild so although there are only five spins (which can’t be re-triggered) this can be a very lucrative bonus feature.

Grabbing those free spins is the key to making the big bucks so play with the maximum twenty five paylines and lower your stake amount if you have to.  Don’t lower it too much though because of course your free spins will be played at the same stake as the base game.

This is an entertaining slot with some quality graphics and animations; it fits Medusa’s supernatural ability into the free spins cleverly and is accompanied by some dramatic background music. There’s an RTP of 96.01%.