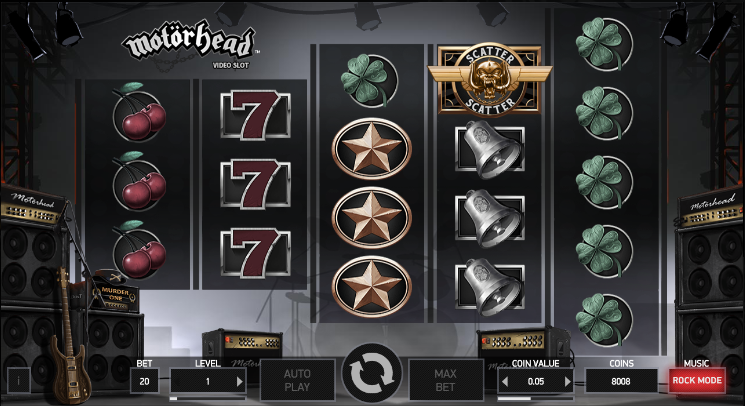 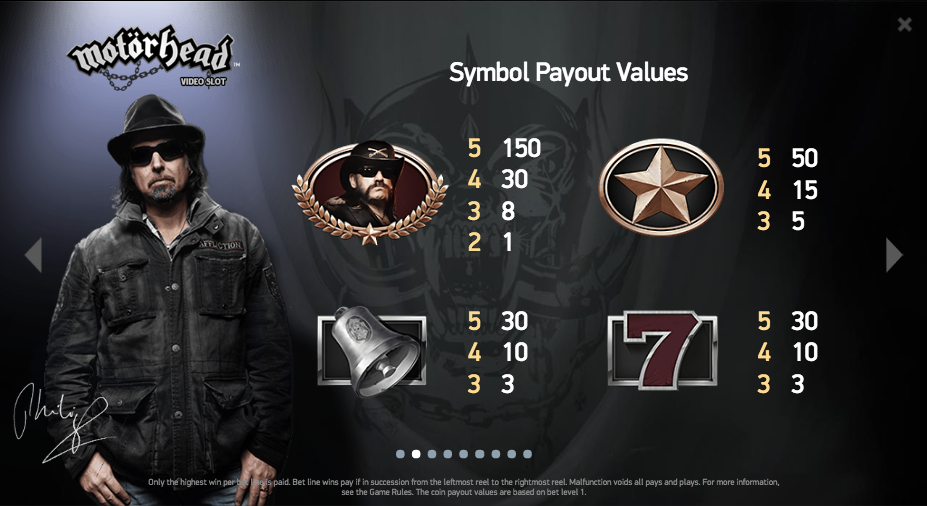 If ever there was an online slot which demanded that you keep the sound turned up loud then it’s this rock-themed game from Net Entertainment. It’s all about Motorhead and their legendary frontman Lemmy and the first thing to say is that it loads up blasting the Ace of Spades at you. That should be enough to tempt you to try out this slot but there’s lots more – an unusual reel design, free spins, the Bomber and the Mystery reel features.

Motorhead is a five reel slot with three to five rows and seventy six paylines; the design is appropriately gloomy and the reels spin against a stage backdrop with speakers, guitars and various performance paraphernalia. There are two sound modes – Rock Mode blasts Motorhead songs at you constantly but turn it off and you’re left with just the sounds of the spinning reels.

There are seven standard symbols and these include Lemmy, a gold star, a silver bell, a red seven, a horseshoe, cherries and a four leaf clover.

The wild symbol is an Ace of Spades logo and it replace all others to form a winning combo except the Motorhead logo scatter icon.

This feature is active on every spin in the base game and free spins and at least one reel will be a stacked Mystery Reel; if there are any mystery symbols showing when the reels stop spinning they will transform another symbol (but not the scatter) to help out with wins.

This may happen randomly before any base game spin and you will see several bombs explode on the reels; this will create at least ten mystery symbols they will transform into another matching icon in the same way as the mystery reel.

This is triggered by landing three of the Motorhead logo scatter symbols anywhere on reels three and four and five; you are now awarded ten free spins and the Mystery Reel now contains wild symbols as well as stacked mystery icons.

You can’t go too far wrong with an online slot based on Motorhead and Net Entertainment have done the business here; this is an excellent game with some fantastic graphics, loads of bonus features and a great soundtrack – it comes with an RTP of 96.98%.