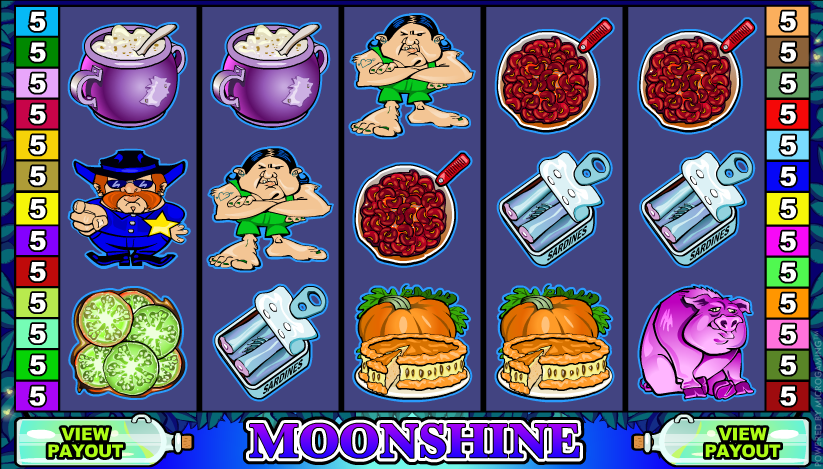 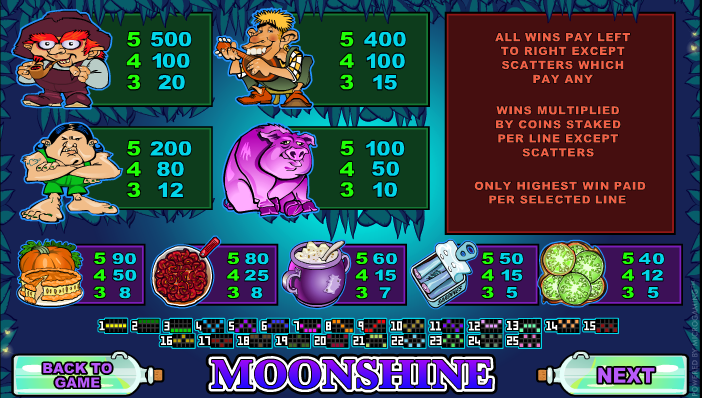 Moonshine conjures up images of illegal alcohol stills, the deep south of the United States and echoes of the films such as the notorious Deliverance. Microgaming have come up with the goods here and Moonshine includes plenty of appropriate symbolism – thankfully apart from anything from Deliverance.

Moonshine is a five reel and twenty five payline slot set in the steamy swamps of the American deep south. There’s no background to the reels in the base game – all the space is taken up by the well-drawn reels.

The lower value symbols are all ingredients of something – sardines, peppers, pumpkins and the like – but hopefully not of moonshine unless it’s going to be an eclectic flavour. The more expensive symbols are a pink pig and three local characters – one a buck-toothed, banjo playing fellow.

The local southern sheriff is a scatter, there’s an old lady on a rocking chair who is wild and then there’s an alcohol jar which is also a scatter that activates the feature.

Fans of free spins will be relieved to find out that there a number available in this feature. To trigger it you will need to land the following:

That’s just the start though and as you can see from the video below the first stage is to pick from a grid which will reward you with more spins and multipliers. This bit ends when you uncover the ‘Start Free Spins’ square and then the spins will begin.

There are two scatter symbols here so if you don’t want to play with lots of paylines active you will still have the same chance of triggering the feature. You will of course win proportionately lower prizes though.

There’s nothing too special about this slot but it does have a nice feature with some added extras and some interesting insect sounds to give the impression of swamp life.