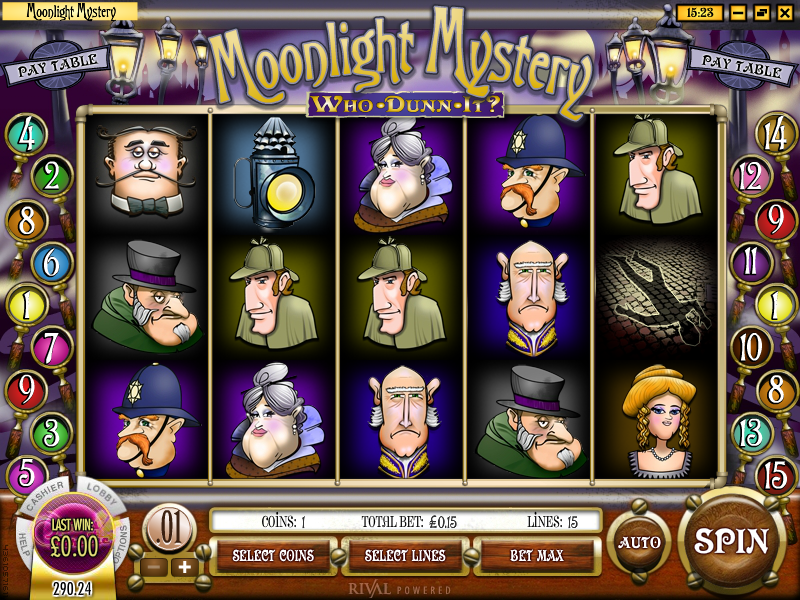 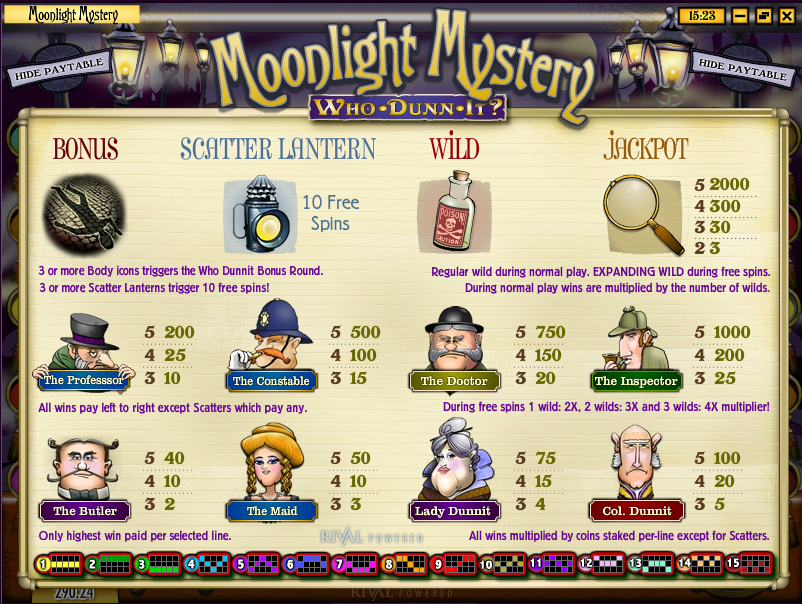 Let’s take a trip all the back to the streets of Victorian England to familiarise ourselves with a character who looks suspiciously like Sherlock Holmes. In this game he’s called The Inspector and his sidekick, who looks remarkably like Dr. Watson is called simply The Doctor. So there’s a faint feeling of plagiarism when you play Moonlight Mystery, this good-looking online slot from Rival Gaming.

Moonlight Mystery plays out over five reels and up to fifteen paylines and the game involves the efforts of The Inspector to solve a murder mystery in turn-of-the-century England. The backdrop to the reels is a misty and atmospheric view of a city silhouette with gaslights illuminating the proceedings.

The symbols are mainly a group of characters from the game including Colonel Dunnit, Lady Dunnit, The Maid, The Butler, The Professor, The Constable, The Doctor and The Inspector. The most valuable symbol is the magnifying glass and just two of these are necessary for a win – worth 3x your line stake.

Special symbols are a bottle of poison wild and two scatters – the chalk outline of a body and a lantern – which activate the features.

Ten free spins will be yours if you can land three of more of the lantern symbols anywhere on the reels. This is a pretty basic feature as you can see from the video above but there is an expanding wild feature. When the bottle of poison lands it will expand to fill that reel completely, paying out for any extra wins it creates.

The spins can be re-triggered by landing more lanterns.

This is a Cluedo-like mini-game and it’s triggered by landing three or more of the chalk outlines anywhere in view. As you can see from the video above your task is to pick a door and then choose a murder room, a weapon and a motive to win prizes. It’s all random and there’s no logic involved so pick whatever you want.

There’s a great Victorian atmosphere to Moonlight Mystery and while the Who Dunnit Bonus could perhaps be a bit more creative, it’s all good fun and your gameplay is accompanied by a suitably mysterious soundtrack.