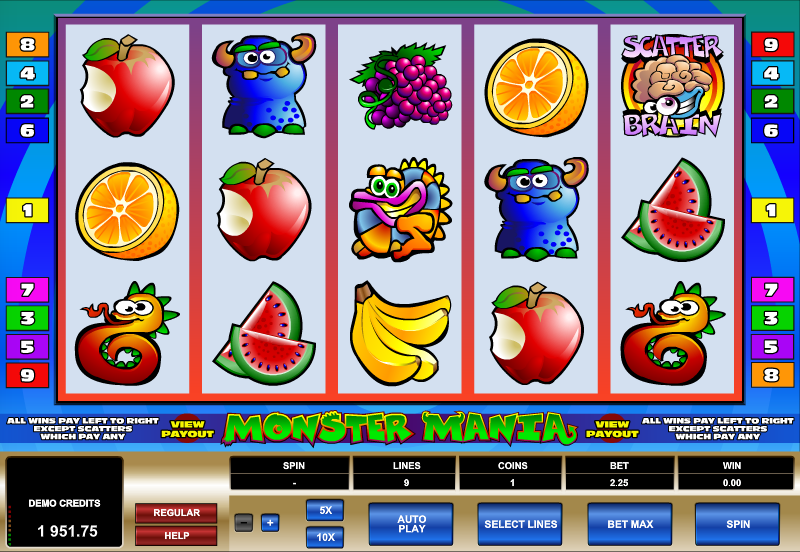 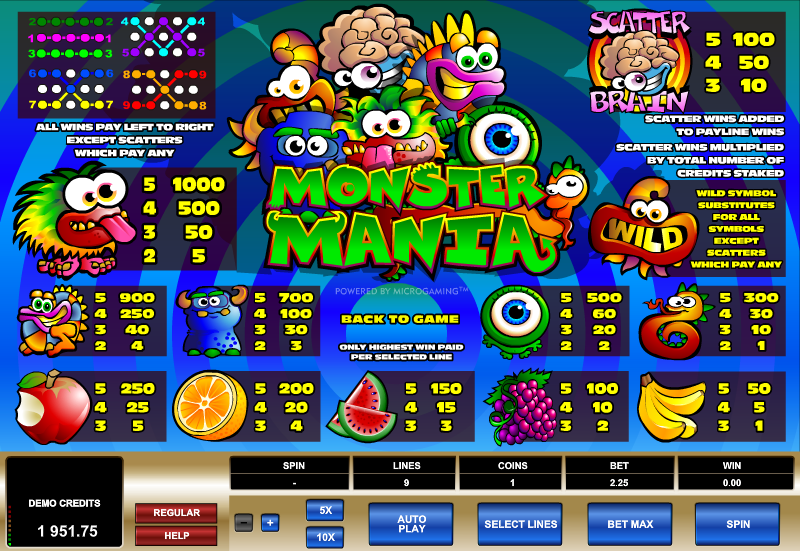 Sometimes a perusal of the games available at one of our recommended casinos turns up an online slot  which has been overlooked – fairly or unfairly. This means we occasionally review a game which is some years old and that’s the case here with Monster Mania from Microgaming. While there’s no comparison between this and much newer releases, some older games retain a classic charm and playability with gives them a bit of extra longevity; read on to find out if this is one of those examples.

Monster Mania is a five reel slot with three rows and up to nine paylines; the obvious lack of graphical bells or whistles demonstrates that this game is from a different age but there is certain cuteness about the characters on the reels.

The high value symbols are all various monsters as the title of the game suggests; we’ll try to describe them – an orange worm, a giant green eyeball, a thee-toed blue creature, an orange and blue razor-backed critter and a cross-eyed furry green thing. The green thing is the highest paying icon and worth 1000x your line stake for five on an active payline. Low value symbols are all fruit – bananas, grapes, watermelons, oranges and apples.

The wild symbol is a giant mouth with the letters ‘Wild’ forming a non-threatening row of teeth;it will substitute for all others except the scatter. The scatter symbol is an exposed brain on top of a pair of eyeballs and a blue grin and will payout for at least three anywhere in view.

That’s it really – there are no bonus features here so Monster Mania relies on it’s gameplay and basic ideals to get by.

So is it worth playing? Probably not when there’s so many more engaging slots out there now but if bonus features aren’t your thing then Monster Mania is a perfectly passable diversion. Try it yourself and make up your own mind, it has an RTP of 95.56%