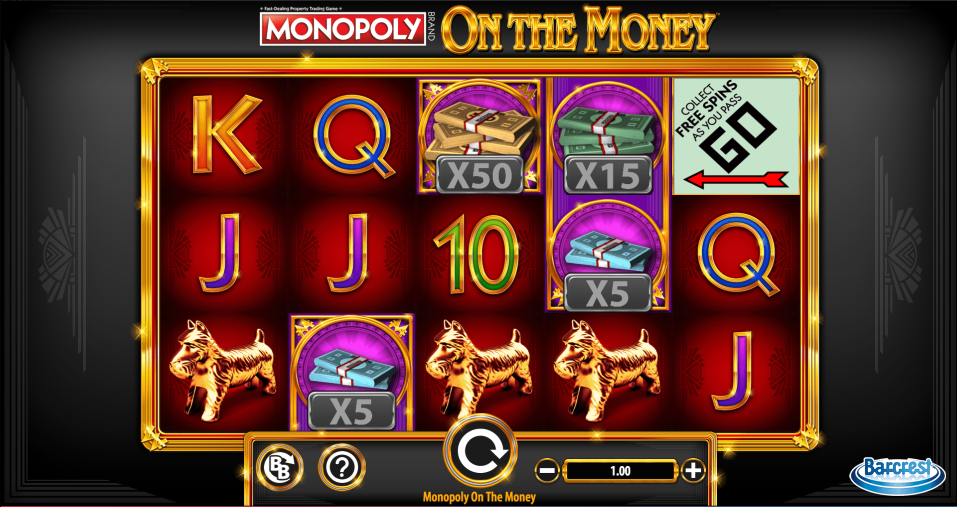 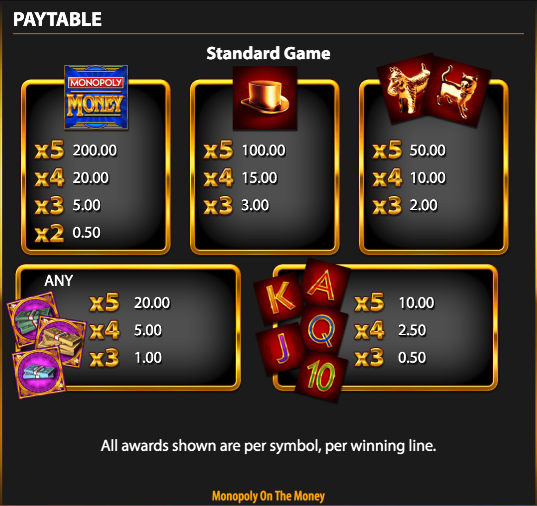 Barcrest are the developers of a nice line of online slot machines based on the board game Monopoly and if that sounds like your cup of tea then this game should be right up your street; it’s full title is Monopoly On The Money and you can read all about it below.

Monopoly On The Money is a five reel slot with three rows and ten fixed paylines; ornate golden borders frame those reels which sit underneath the familiar Monopoly logo at the top of the screen.

The high value symbols include the game’s logo, some of the board game pieces (top hat, cat and dog) and various sized piles of cash which can pay mixed; 10, J, Q, K and A make up the lower values.

The ‘Go’ symbol is wild and and will substitute for all others to form winning combos; it’s also the scatter and the key to the main feature.

This is triggered by landing three, four or five of the wild/scatter symbols anywhere in view for which you will receive 10, 15 or 20 free spins respectively. Before the spins start you’ll be given the option to gamble those spins to increase them but of course the number can also go down.

When the spins are underway Mr Monopoly appears on the reels – he acts as an extra wild but he’ll also collect any multipliers (which are attached to the piles of cash) and apply them to the total stake. There are no scatters present in this round so it’s not possible to trigger any more spins (the Big Bet option differs a bit as described below).

This game utilises Barcrest’s Big Bet option which offers players the chance to buy five linked spins for £20, £30, £40 or £50 which progressively better incentives:

The Chance Card is offered at the end of the round and may offer more spins, a cash prize or just a confirmation of the end. The Red Hot Respin awards an extra spin at the end of the Big Bet if two scatters/wilds are locked on the reels. The extra rows provided by the house and hotel extensions don’t contribute to normal wins but special symbols such as scatters, multipliers and Mr Monopoly are active there.

If the free spins are triggered during the Big Bet Mr Monopoly will collect the multipliers and he’ll multiply them by £2.00.

Barcrest slots with the Big Bet option are always a little complex but hopefully we’ve explained it sufficiently well – once you know what you’re doing it’s a very engaging slot with lots to offer and some potentially big wins. The RTP increases to a hefty 97.75% when playing the Big Bet so bear that in mind.