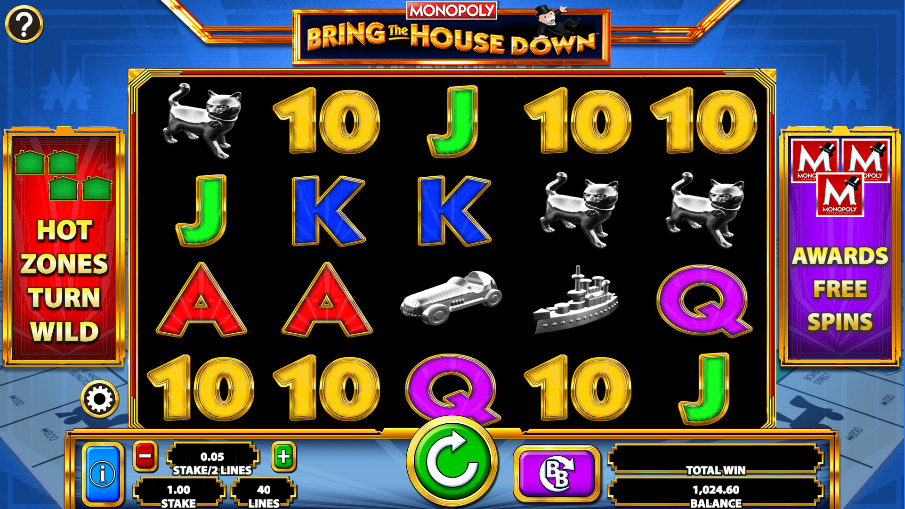 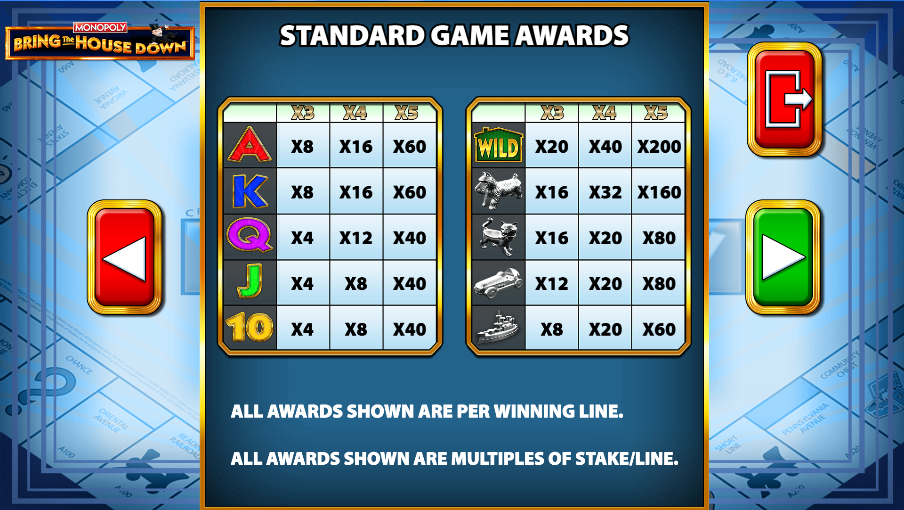 For fans of board games and online slot machines there are a number of Monopoly-themed games available to play and the good news is that there  there’s no another to add  to the list; this one’s called Monopoly Bring The House Down, it’s developed by Barcrest and you can find out it all works right here.

Monopoly Bring The House Down is a five reel slot with four rows and forty fixed paylines; the straight lines of the gold and red frame are placed against a backdrop on which a Monopoly board is just about visible.

The high value symbols are four of the original metal game pieces and they comprise the dog, the cat, the car and the ship; 10, J, Q, K and A make up the lower values.

The wild symbol is a big, gold ‘Wild’ inside a green house shape and it will substitute for all others to form winning combinations except for the Monopoly scatter icon. 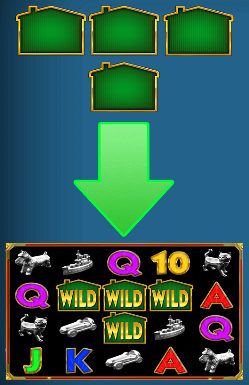 There are no wild symbols on the reels but during each spin a pattern of wilds (a Hot Zone) will appear and, if you are lucky, land on the reels. At random these wilds can then be upgraded to a hotel which will add a multiplier value to any wins.

Barcrest’s Big Bet feature is on show here and this gives players the opportunity to buy five linked spins for an extra cost – there are several levels of Big Bet options:

A Community Chest card can award the following features:

This is triggered by landing three of the Monopoly scatter symbols anywhere on reels one, three and five and you will receive eight free spins; all wild houses and hotels which land will remain in place until the round ends. It’s not possible to trigger any more spins during this feature.

This is awarded randomly after a spin and you will get to pick one of three Chance cards which will reveal a Hot Zone pattern to be dropped onto the reels.

This is another randomly awarded feature which will place a Hot Zone onto the reels and you then have three seconds in which to accept it or pass to the next one; it’s possible another one may not be offered and in that case the current one will be awarded regardless.

If a Hot Zone doesn’t appear at all on the reels the this feature may occur and you will see that Hot Zone placed on the reels anyway.

Phew! That’s a lot of features but once you’ve got your head round them they all make sense; this is a very playable Monopoly slot with some interesting stuff going on and as always with the Big Bet feature, it pays to use it because the RTP increases to a maximum of 98.10% when you do.