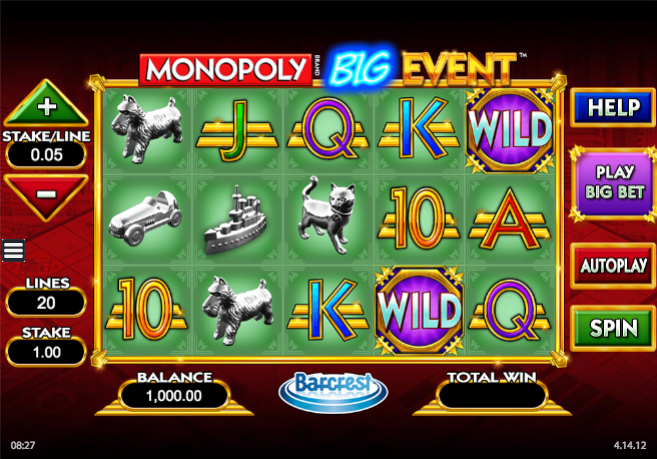 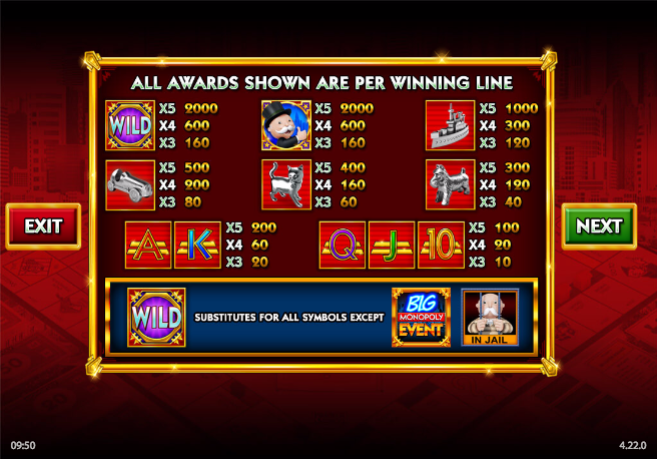 Players familiar with online slots will know that there are already a number of Monopoly-themed games produced by IGT for fans of the famous board game. We now have another designed by Barcrest under the umbrella of Scientific Games and very nice it is too; it combines some creative bonus features with a potential RTP of 99.00% which is the highest we’ve seen.

Monopoly Big Event is a five reel slot with three rows and twenty fixed paylines; the Monopoly-inspired design is quite clear and behind the reels there’s a traditional board in the red haze.

There are five high value symbols which unsurprisingly are playing pieces – Mr Monopoly, the ship, the car, the cat and the dog. 10, J, Q, K and A are the lower values.

The wild symbol is a big purple ‘Wild’ and there’s a Big Event bonus icon which appears only on reels one, three and five.

The Big Bet is not a really a bonus feature but an opportunity to increase your stake to play five spins with enhanced features. There are two options:

This is triggered by landing three, four or five of the Big Event bonus symbols anywhere on reels one, three and five (they can appear stacked to make this possible). It’s essentially a free spins round but first you will need to pick some cards (as you can see from the video above).

Triggering the feature with four symbols will allow the House Sneak Preview and with five will award the Hotel Sneak Preview. These allow you to see where the ‘chance’ cards are during the first phase and it’s also here where the number of free spins and any guaranteed wins are awarded.

The Chance cards can award the following during the spins:

If you land the ‘In Jail’ symbols anywhere, the lowest ranked icon will be removed from the reels.

Monopoly Big Event is a worthy successor to IGT’s range of games and we like the addition of the Big Bet option for those with bigger bankrolls. It’s good fun to play, action-packed and has an RTP range of 96.00% to 99.00%.