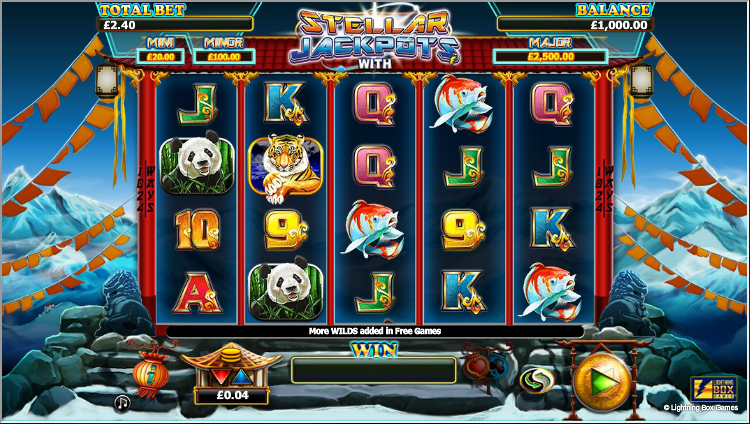 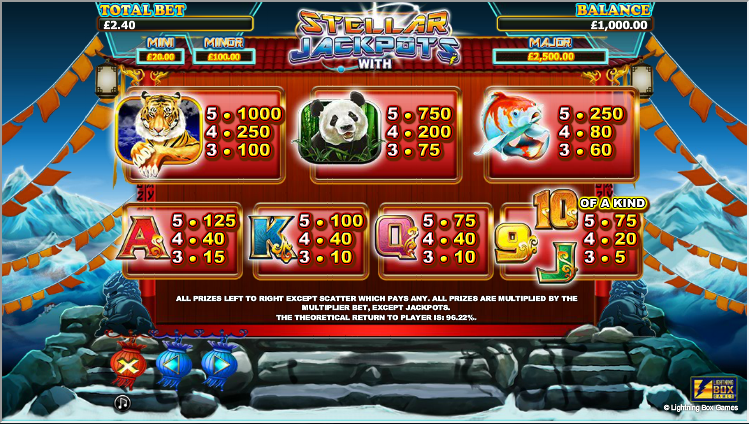 Those of us of a certain age will remember with fondness a 1970s television show called Monkey which followed the adventures of several characters from Chinese legend; now Lightning Box have developed an online slot which appears to be partly based on the main character while also including lots of other familiar oriental items – it’s called More Monkeys and it comes complete with a progressive jackpot.

More Monkeys is a five reel slot with four rows and 1024 ways to win – winning combos can be formed as long as there are matching symbols starting from reel one. The reels spin on the side of a temple on the summit of some icy mountain where prayer flags and Chinese lanterns accessorise the landscape.

The three theme-related symbols include a tiger, a panda and a leaping Koi carp; 9, 10, J, Q, K and A represent the lower values.

Monkey himself is wild, he appears only on reels two and four and he will substitute for all other symbols except the bonus scatter – that’s a big red ball which activates the main feature.

This is triggered by landing three, four or five of the red ball scatter symbols anywhere in view for which you will receive 7, 10 or 20 free spins respectively. Before the spins start you will get to choose one of three extra features:

During this round an extra baby monkey wild is added to reels two, three and four also.

A chance to win one of three Stellar progressive jackpots can be randomly awarded on any spin; you will now play a game in which you shoot targets to work your way up to the jackpot level – then match three symbols to win the Mini, Minor or Major prizes.

If you’d like to gamble you latest win just click the hearts/clubs button below the reels; here you can try and double/quadruple your win by guessing the colour or suit of the next card drawn.

More Monkeys is a highly detailed slot with lots going for it including an enhanced free spins round, a progressive jackpot and a chance to gamble your winnings. It comes with an RTP of 96.22%.