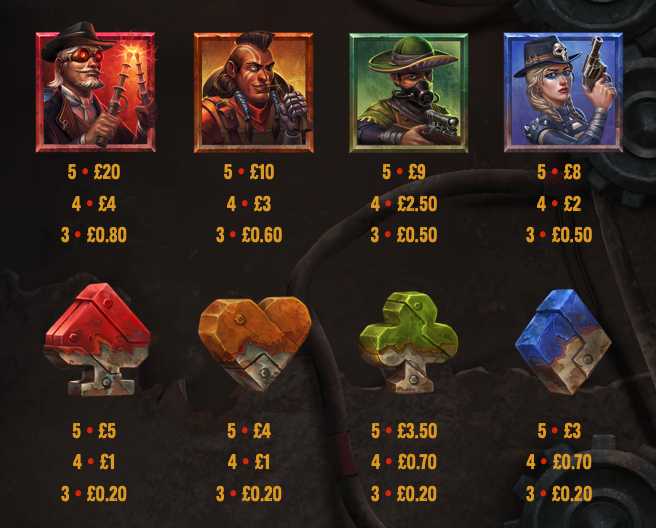 The train has left the station and the assorted crooks have been assembled to rob it in this online slot from Relax Gaming – it’s called Money Train 2 and it comes with a respin round and the man feature in which various characters will turn up to help out on each spin.

Money Train 2 is a five reel slot with four rows and forty fixed paylines; those reels spin on the side of a reinforced metal train which moves along the tracks in front of some Old West town.

The four high value symbols are the main characters in this story – the Collector, the Sniper, the Necromancer and the Payer; metallic playing card symbols in red, orange, green and blue make up the lower values. The skull is wild and the ‘Bonus’ is the scatter symbol.

This is short and sweet and is triggered by landing exactly two bonus symbols anywhere in view; those bonuses will reveal a multiplier value and the reels will now spin until a win is created. Each non-winning spin will increase that original multiplier by 1x and the total value will be applied to the eventual win.

Landing at least three of the bonus symbols anywhere in view will kick this feature off and those bonuses will lock in place and reveal a multiplier value up to 10x; you’ll receive three respins which will be reset each time a new bonus symbol lands on the reels and locks in place. Once a reel is filled with symbols a new reel will be added – this can happen twice for a maximum of seven reels.

There are also other symbols which can land during this round to help out:

There’s a maximum win of 50,000x the stake in the Money Cart Bonus Round.

There’s plenty of atmosphere and action in this slot from Relax Gaming and some really high quality graphics which complement theme very well; the luckier players will get to see some big wins in the main feature but we should all be able to appreciate the guaranteed win in the Respins round.

Yes! The Respins Feature and the Money Cart Bonus.

The Return To Player percentage for Money Train 2 is 96.40%.

How To Win On Money Train 2?

Where can I play Money Train 2?