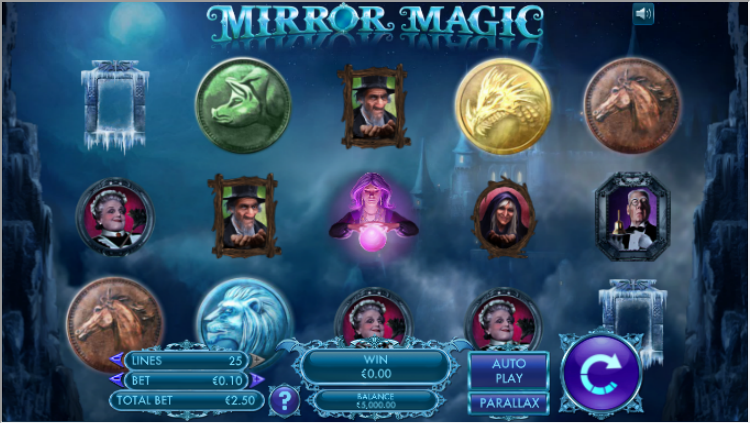 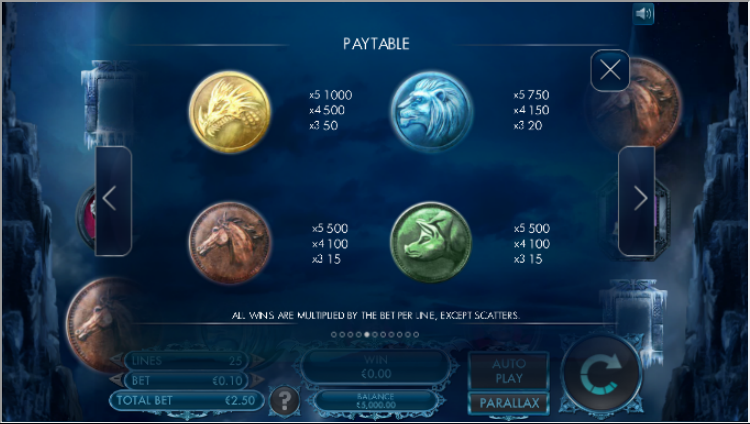 Sometimes it’s a little tricky to pin down a specific theme for a particular online slot and that seems to the case with this atmospheric game from Genesis Gaming. It’s called Mirror Magic and we would describe it as slightly gothic, a little bit creepy and perhaps influenced by literature such as Mervyn Peake’s Gormenghast. You can read all about it below.

Mirror Magic is a five reel slot with three rows and twenty five fixed paylines; the various symbols float against a backdrop of a huge castle beneath a full moon with clouds and rocky outcrops competing the spooky scene.

The standard symbol include four animal emblems of different colours – yellow, blue, brown and green – along with five odd-looking characters from this untold story and an icy mirror.

The wild symbol is represented by a small jester and he will substitute for all others except the scatter – five wilds on a payline will pay the biggest prize of 2000x your line stake. The scatter is a lady with a glowing, purple crystal ball which activates the main feature.

This is triggered by landing three or more of the scatter symbols for which you will receive the following:

There’s a new set of reels in play during this round with higher prizes and it’s also possible to trigger more free spins by landing three, four or five more scatters during this bonus feature.

The attraction for us in Mirror Magic is the spooky atmosphere created by the graphics and the sound effects but all-round it’s one to check out with a lucrative free spins round and an RTP of 97.12%.