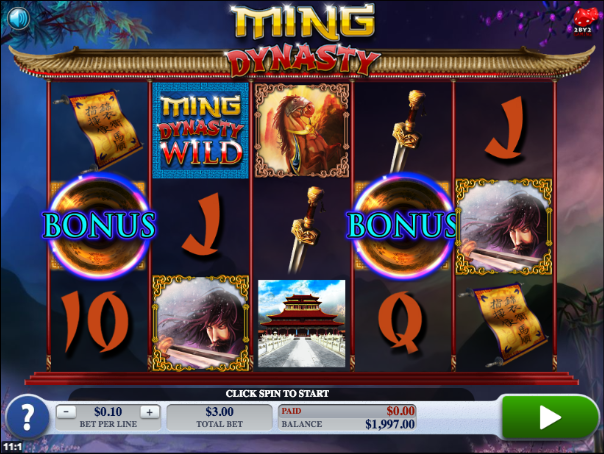 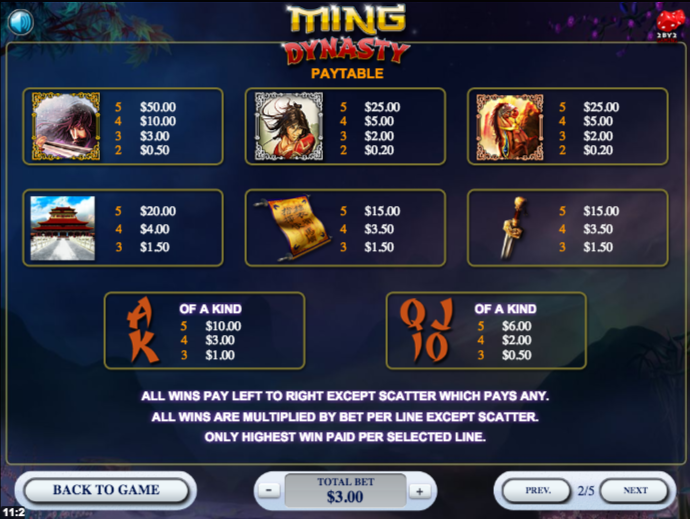 As all online slots fans will know, the Ming Dynasty ruled China for two hundred and seventy six years between the 14th and 17th centuries; an empire lasting that long surely deserved a game all to itself and here it is – it’s called simply Ming Dynasty, it’s developed by 2By2 Gaming and it comes with two bonus features.

Ming Dynasty is a five reel slot with three rows and thirty fixed paylines; those reels spin on the walls of a temple while in the background we can see mountain peaks rising up into a night sky of varying colours.

There are six them-related symbols in this game and they include two characters from this story, a rearing horse, a large temple, a scroll and a sword; lower values are the standard 10, J, Q, K and A.

The game’s log is wild, it appears on reels two, three, four and five and it will replace all others to form winning combos except for the bonus icon.

On every spin a stack of positions on each reel are replaced by one of the symbols at random (apart from the wild and bonus icons) with the potential to help out with some bigger wins,

This is triggered by landing three or more of the bonus symbols anywhere in view for which you will receive:

First you need to select one of the options shown to determine which symbols pays as ‘Any Way’ rather than just on the standard payline structure and then the spins will begin. Landing three+ more bonus icons will award more free spins during this round and you’ll keep the same Any Way symbol when this happens.

There’s a nice oriental atmosphere to the Ming Dynasty slot which is enhanced by the musical accompaniment; there are some top notch animations on show, an RTP of 96.03% and this is a game to be checked out.