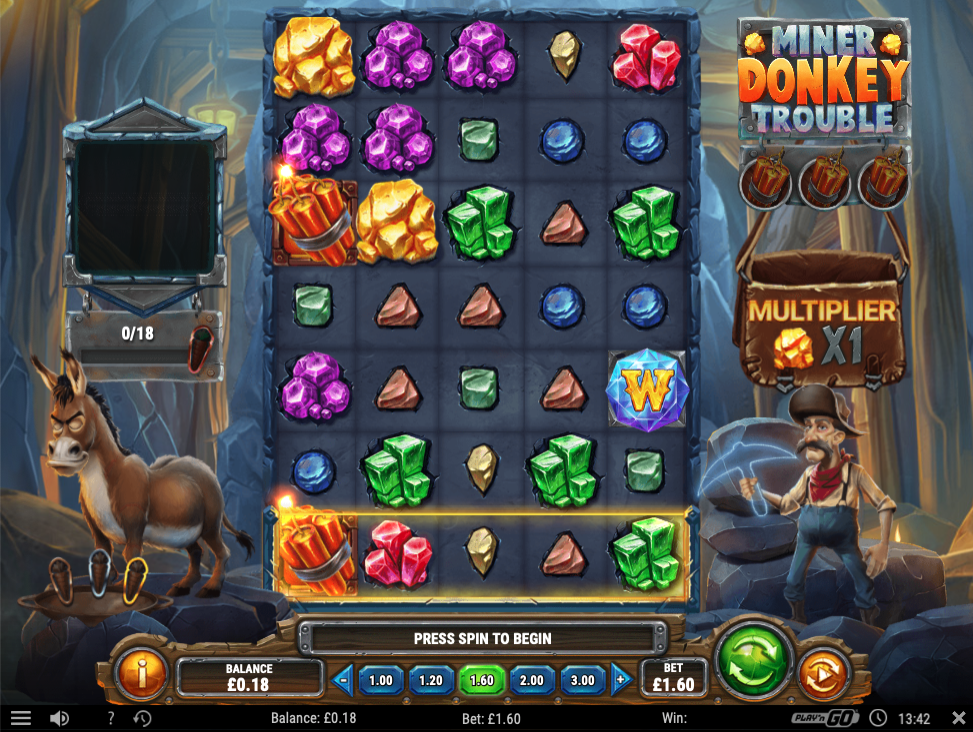 Life down a Victorian mine was always tough, occasionally cheered up by a solid pun like Miner Donkey Trouble – that amusing statement is also the title of this online slot from Play N Go; it’s an arcade-style game in which the aim is to collect clusters of rocks and gems to trigger the mini-themed bonus features.

Miner Donkey Trouble plays out on the 5 x 7 grid you can see above against a backdrop of a cavernous mineshaft with our intrepid miner on the right and his recalcitrant donkey on the left. The aim of the game is to form clusters of at least five matching gems or rocks after which they’ll disappear and allow more to fall in from above, potentially continuing the process.

The four gems in red, green, blue and pink are the high value symbols while the rocks are the lower values and coloured yellow, green, dark blue and brown; the golden ‘W’ is wild and the special symbols are the golden nuggets and the dynamite scatters.

On any particular pin golden nugget may land on the bottom row of the reel set (it’s framed by gold) and each one will increase the win multiplier for the next successful cluster by 1x.

Here you’ll be trying to fill up the meter on the left hand side by the donkey and each symbol in a winning combination contributes to that; there are three levels of destruction as follows:

Each completed meter is marked by a carrot appearing below the donkey.

You may have noticed the miner waving around an imaginary pickaxe on the right hand side and he’s waiting for one to land on the reels to trigger this feature; between four and ten wild symbols will now be added to the reels to hopefully set up some big wins.

This can trigger at random on any non-winning spin and one or two large symbols (2×2, 3×3 or 4×4) will be placed somewhere on the reels.

The dynamite scatter symbol can appear as part of a cascade and when it lands it will destroy itself and all symbols two positions around it to allow more to fall in from above.

This feature is triggered after three dynamite explosions on the same spin; you’ll receive five free spins initially but they can be retriggered in the same way another three times.

The nugget multiplier is active during this round and it won’t reset between spins – watch it play out in the gameplay video above.

The RTP may be slightly below average but you should overlook that because this is an enormously entertaining slot with loads of bonus features, consistent action and some amusing, cartoonish characters – highly recommended!