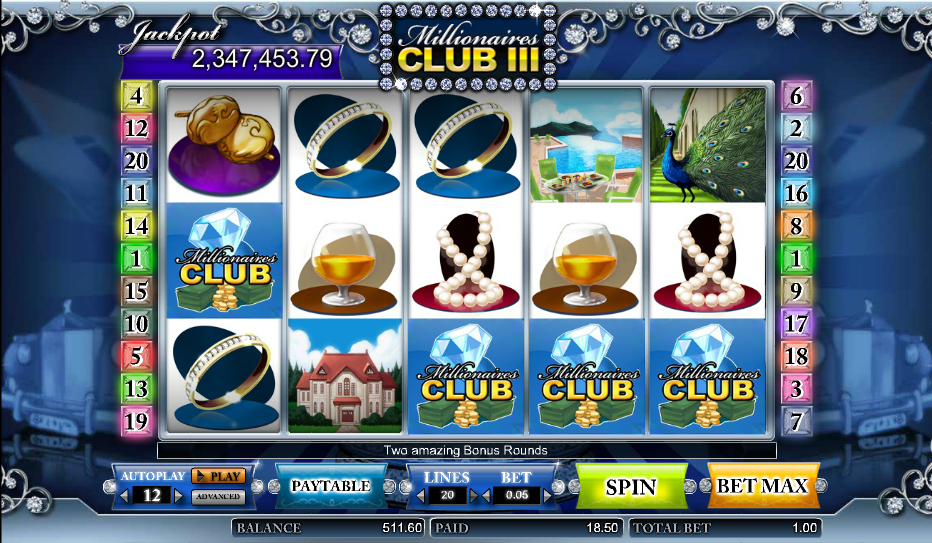 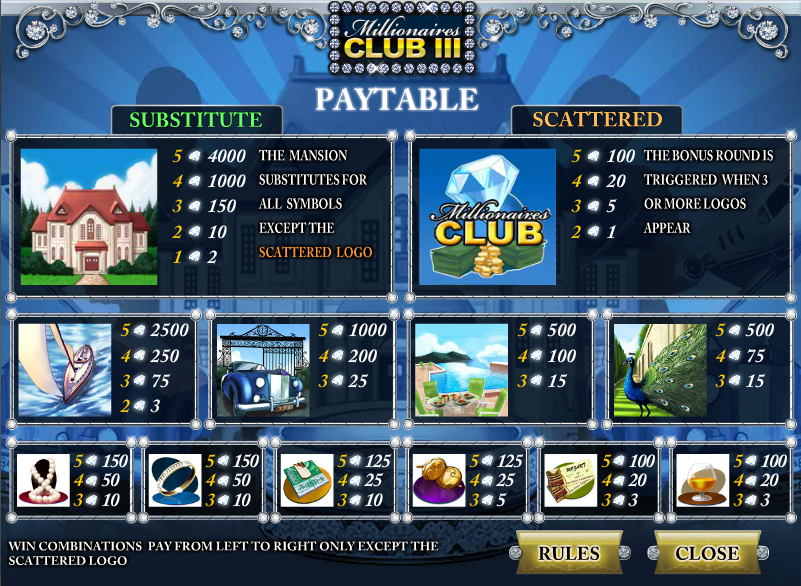 If you’ve played one of the Millionaires Club series then you won’t be surprised to hear that this online slot is developed along the same lines. It’s from NextGen Gaming and it’s a step up in graphics quality from it’s predecessors – fortunately it also belongs to the same progressive jackpot network and offers a huge prize for the lucky winner.

Millionaires Club III is a five reel slot with three rows and up to twenty paylines; the whole set up is accessorised with sparkling diamonds and in the background there’s a couple of luxury cars – all the sort of thing you could buy if you could just win that giant jackpot.

All the symbols are luxury items and include a yacht, a posh car, a sun-drenched swimming pool, a peacock, a pearl necklace, a gold ring, gold cufflinks, a glass of brandy, banknotes and tickets to a Mozart concert.

The wild symbol is a mansion and it substitutes for all others except the scatter – that’s represented by the Millionaires Club logo.

This is triggered by landing three of more of the Millionaires Club scatter symbols anywhere in view and you will be whisked to a screen displaying one hundred gemstones.

All you have to do is keep picking them to reveal cash prizes, multipliers and jackpot tokens until you find three strikes at which point the round is over.

If you manage to find three of the jackpot tokens then you gain entry to the progressive jackpot game.

If you found three tokens in the manner described above then you now get to play the Wheel Of Fortune round. This wheel has three parts – outer, middle and inner – and you start by spinning the outer wheel. You will either land on a cash prize (the round is over) or you will hit an arrow which takes you to the middle wheel; if you make it right into the centre the jackpot is yours.

Millionaires Club III is really just a poshed-up version of it’s predecessors but they were enjoyable slots and this is as well. That progressive jackpot is certainly tempting and there’s an RTP of 94.55%.