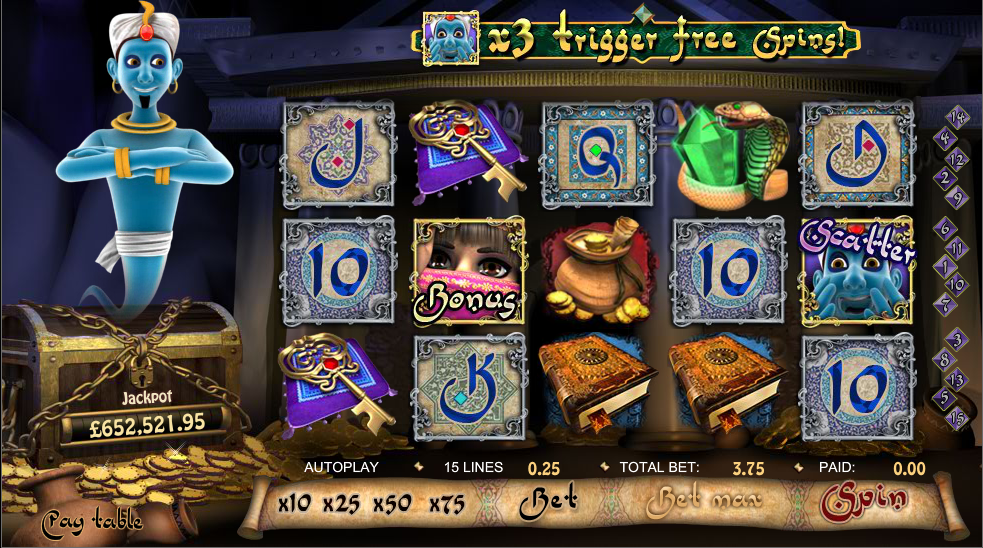 Millionaire Genie is one of the latest online slots from Random Logic and in this particular game, not only is the genie capable of dispensing wishes, he’s also a millionaire willing to hand out huge wads of cash. That’s because this slot features a progressive jackpot which, at the time of writing, is approaching £700,000.  That amount will go up and down of course as it’s won but it’s a tempting prospect.

Millionaire Genie features five reels and fifteen paylines and of course it’s based on the genie from the story of Aladdin.  The blue genie floats above a chained-up treasure chest to the left of the reels, ready to dispense cash should you land a win.

As well as the bejewelled playing card symbols we have a spell book, an ornate key, a green-eyed snake, a bag of coins and the famous lamp.  The girl with the pink scarf is the bonus symbol, the genie himself is the scatter and the ‘MG’ logo is the wild.

We’ll start with a good old free spins round and this feature is triggered by landing three or more genie scatter symbols anywhere on the reels.  The genie will grant you a random number of spins but the more scatters you land, the more you’ll get.

During this feature he will randomly add wild symbols to the reels and these will remain on reels until there are no spins left; they may change position however.

Landing three of the girl scatter symbols anywhere on the reels will trigger this game and all you need to do is make two choices from the two rounds – one will award a cash amount and the other a multiplier for that prize.

Who doesn’t like a progressive jackpot?  Not many punters we imagine and this one is won randomly.  You don’t need to spin any particular combos to win it – the genie awards it randomly although the higher your stakes, the better chance you have of a massive payout.

This game is all about the progressive jackpot so increase your stake as much as you can to give yourself the best chance of winning it.  The odds are still against you but if you don’t buy a ticket, you won’t win the lottery…..

Millionaire Genie is a very high quality slot with some fantastic graphics and animations; two bonus features and a progressive jackpot make this a ‘must play’ in our opinion.