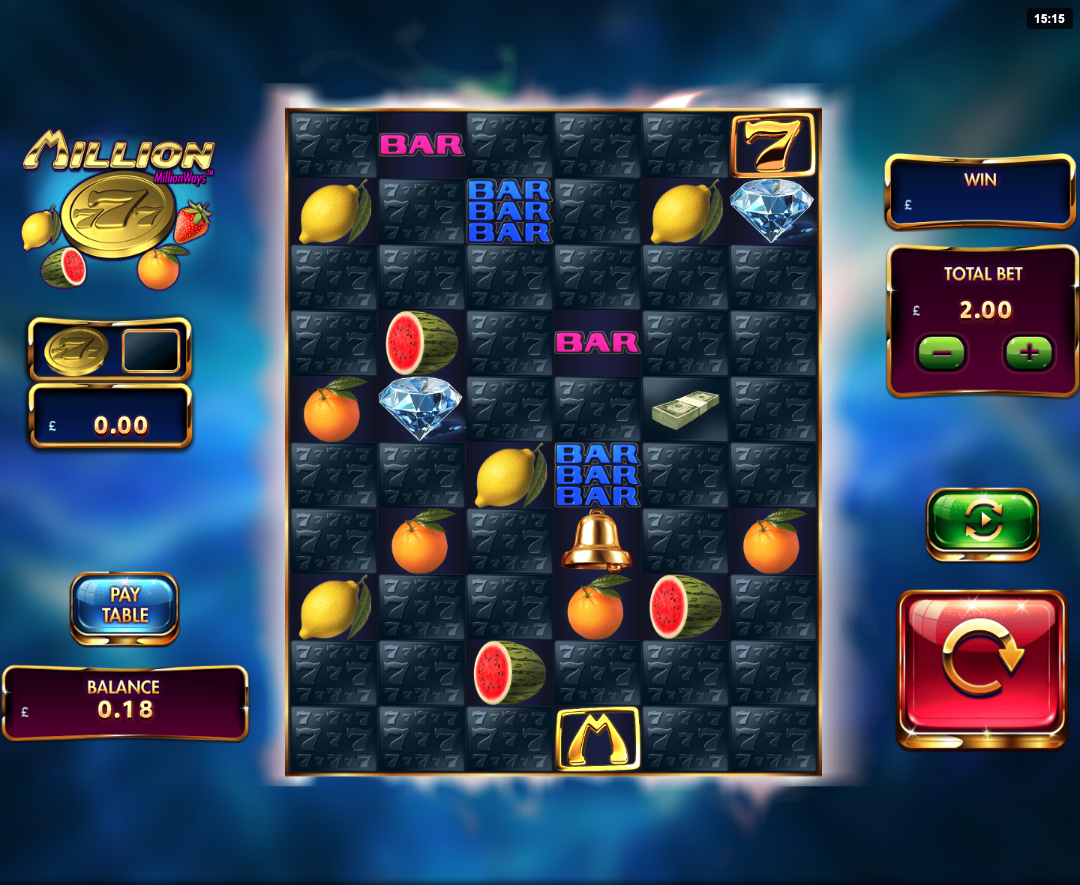 Fans of online slots from Red Rake Gaming will recognise the reel layout in Million 777 from games such as Solomon: The King but the similarity ends there because this one comes with a whole are set of clever bonus features and chances to win – read all about it below.

Million 777 is a six reel slot with ten rows and a hefty one million paylines on which to win; note that there are plenty of blank spaces on the reels which do nothing (except for one of the features).

The symbols are a familiar bunch and include red sevens, blue diamonds, triple/double/single bars, golden bells, strawberries, watermelons, lemons and oranges. The golden ‘W’ is wild and the horde of special symbols include horseshoes, piles of cash, gold/silver sevens and gold/silver letter Ms.

Each coin which lands in view will increment the meter to the left of the reels and add a small amount to the total below it; when the meter is fill the mini game is triggered which is played on a 3 x 5 set of reels with three coins locked in place. Three spins are awarded and if any more coins land they’ll lock in place also and reset the spins to three again. All coins have cash values attached which are awarded at the end of the round and it’s also possible to win the Minor, Major and Grand prizes which appear during this feature.

Landing a gold ‘X’ on the reels will apply a win multiplier of 2x, 3x, 5x or 10x, denoted by the little animation on the left hand side.

Landing three, four or five of the silver horseshoes anywhere in view will award 8, 12 or 16 free spins respectively; during this round there’ll always be a cash pile on reel one and and a silver horseshoe, wild and gold seven on reel two.

This is triggered by landing at least three piles of cash in view and now you’ll see each of the blank positions spin and turn into cash also – the win is then evaluated; any if you entered this feature with more than three cash piles then each of those extra ones will be a 2x win multiplier.

The silver M can appear on reels two and three and when it does it will become wild, lock in place and respin the other reels. If it’s on both those reels then a 2x win multiplier is awarded.

Landing three golden M symbols in view will kick this feature off and you’ll see reels three and four merge into one and reveal bonus features to be won:

Aside from the slightly basic graphics there’s plenty to like about this slot because of the huge number of features on offer and if you wait long enough the 777 Minigame will come along in the end when that meter is filled.