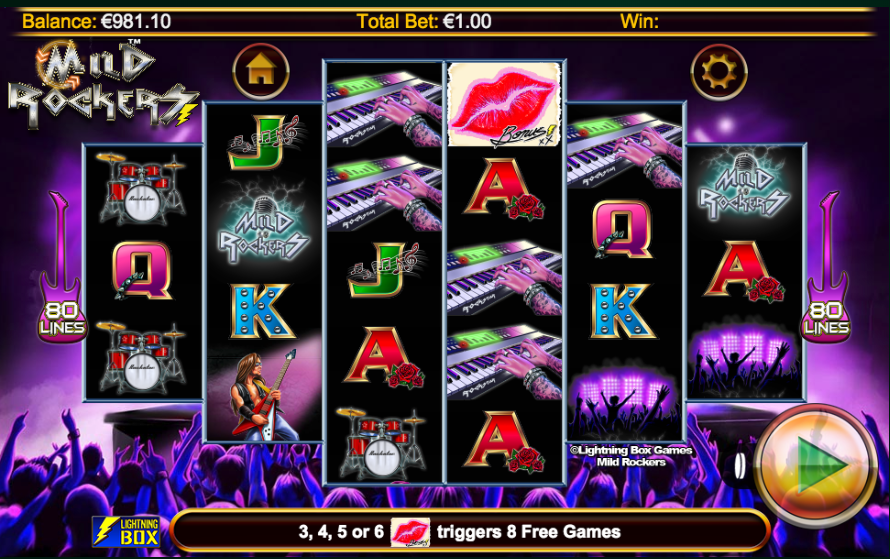 If you’ve ever fancied dipping a toe into the wild world of rock and roll but are concerned that it looks a little too wild then we may have a compromise for you; this is a game called Mild Rockers from Lightning Box Games, it comes with an enhanced free spins round and you can read all about it below.

Mild Rockers is a six reel slot with variable rows and eighty fixed paylines; those reels float above a mildly excited audience cheering half-heartedly towards a stage awash in a purple glow.

The high value symbols are the Mild Rockers logo, the guitarist, a set of drums, a keyboard and those aforementioned fans; J, Q, K and A represent the lower values.

The purple-haired singer is wild and she will substitute for all others to help form winning combinations except for the lips bonus symbol which is the key to the main feature.

This is triggered by landing three or more of the lips bonus symbols anywhere in view for which you will receive an initial eight free spins. Once the spins are underway any more lips which land (now with ‘Encore’ added to the pic) will award one Encore Spin.

Encore Spins are collected ad begin when the standard free spins have ended and here an extra symbol appears – the Wild Rockers icon (formerly Mild Rockers); this acts as an extra wild during this round offering the potential of some big wins with two wilds in play.

Mild Rockers is certainly an engaging way to pass your reel spinning time and it’s a slot which offers an unobtrusive guitar soundtrack to accompany your gameplay; the enhanced free spins round can award some big wins and there’s an RTP of 95.57%