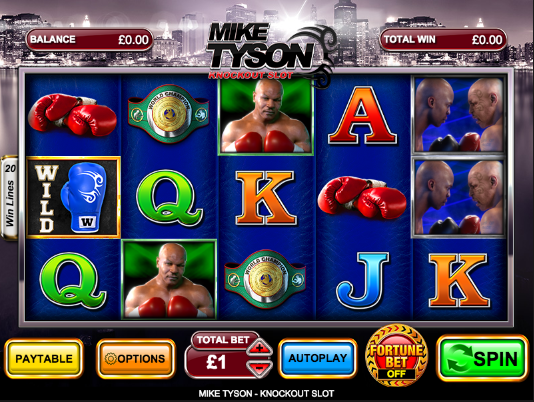 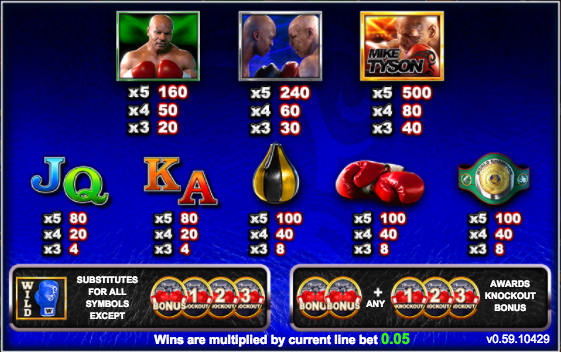 In the late 1980s, pugilist Mike Tyson was the undisputed heavyweight champion of the world, rampaging around the planet’s boxing rings and knocking down anyone he fought. Tyson went off the rails somewhat in the 1990s but regained world titles once more before finally retiring in 2002. Clearly it’s about time he had his online slot…..

Mike Tyson Knockout is a five reel slot developed by Inspired Gaming with three rows and twenty fixed paylines; the neat and tidy silver framed reels are set against a backdrop of a cityscape glowing with lights of every kind.

The theme related symbols on show are Mike Tyson, Tyson facing up to an opponent, the game’s logo, a punchbag, a pair of boxing gloves and a championship belt; J, Q, K and A make up the lower values.

The wild symbol is a single blue boxing glove which will substitute for all others to form winning combos except for the bonus boxing gloves and the numbered boxing gloves.

This is triggered by landing two bonus symbols and at least one of the numbered boxing gloves anywhere in view; you will now be offered a number of spins and a win multiplier but you can use one of the numbered knockouts to obtain a different offer. When there are no knockouts left you must accept what’s offered.

There are three randomly occurring features which can be awarded at any time:

Using the Fortune Bet option underneath the reels will double your bet but offer an increased chance of landing the bonus feature.

It’s good to see Iron Mike in his very own game and good fun it is too – the bonus features are well thought out and there’s plenty of money-winning potential here. Mike Tyson Knockout comes with an RTP of 94.70%.