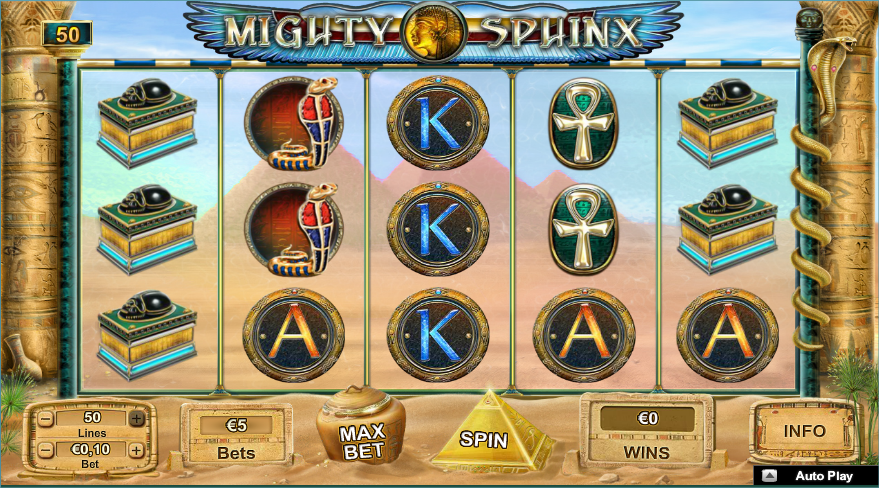 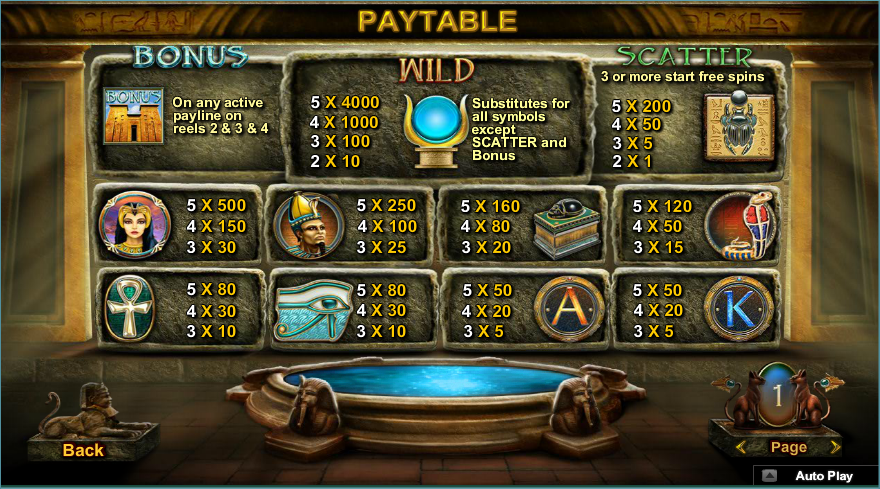 Some online slots give the theme away as soon as you take a glimpse at the title and it’s fair to say that the name Mighty Sphinx should make the subject of this game pretty clear; this Egyptian-themed slot is developed by NeoGames, it comes with two separate bonus features and you can read all about it here.

Mighty Sphinx is a five reel slot with three rows and up to fifty paylines; those reels are delicately designed but look to the right and you’ll see a cobra coiled around the upright. Two hieroglyph-covered pillars frame the reels while in the background we can see several pyramids stretching off into the distance.

There are six theme-related symbol in Mighty Sphinx and these include the royal male and female characters, a box adorned with a black scarab, an ankh, a golden cobra and the Eye of Ra; K and A are the lowest value symbols.

The wild symbol is the glass orb and it will substitute for all others to form winning combos except for the temple bonus and scarab beetle scatter icons.

This is triggered by landing three or more of the scarab scatter icons anywhere in view for which you will receive ten free spins; on each spin the multiplier for any wins will increase by 1x so that by the 10th spin all winnings will be multiplied by 10x – not too shabby. You can’t trigger any more spins from within this round.

Trigger this by landing three of the temple bonus symbols on an active payline on reels two, three and four; it’s possible to accomplish this on two different paylines and if you can manage that all wins will be doubled.

The feature is a multi-level picking game in which you must choose stones to reveal prizes and advances to the next, more valuable level but collecting three strikes ends the game (while paying out a compensation prize).

Mighty Sphinx is a nice-looking game with lots of incidental detail and two bonus features with some added extras; it’s a decent addition to the massed ranks of Egyptian-themed slots and well worth checking out.