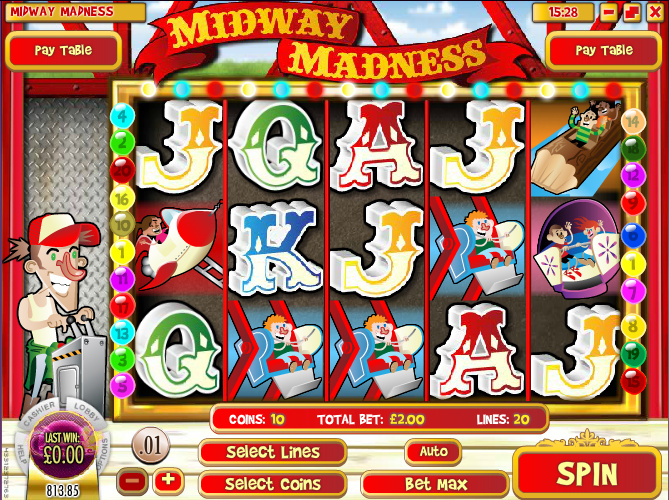 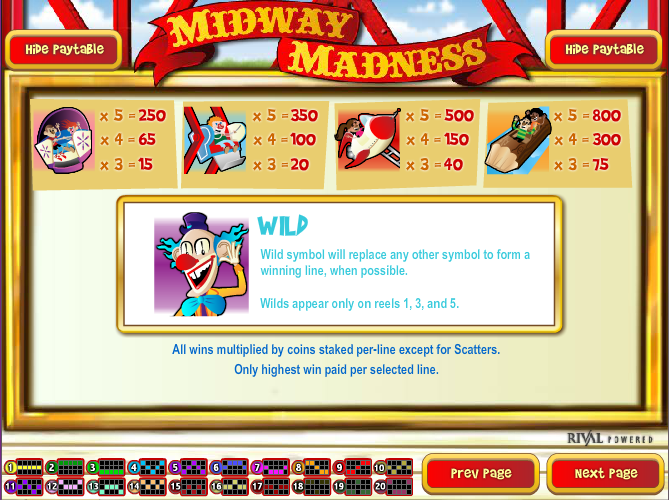 Everybody likes a day out at a theme park and it’s just such a place which is the subject of this online slot machines from Rival Gaming. Here the amusement park is called Midway and probably based on the iconic location of the same name in New York state. The game is called Midway Madness and it’s one of Rival’s i-Slots range or super-duper slots.

Midway Madness is a five reel and twenty payline game set in this old-style theme park. To the left of the reels is a dodgy-looking ride operator and those reels are surrounded by bright lights.

The main symbols include a log flume, a rocket ride, a big wheel, a children’s ride and a chap in a stripy green jersey looking decidedly ill. J, Q, K and A are the lower values designed in a Victorian manner.

Special symbols include a clown wild, a dodgem bonus and a pair of ride tickets which activate one of the features. The wild symbol only appears on reels one, three and five.

Land three or more of the ride ticket scatter symbols anywhere on the reels and you will be entitled to the following spins:

The little dodgem car is also a scatter symbol and landing three or more anywhere in view will kick this bonus off; each time you trigger the bonus, the reels will alter between the original setting (rides), a games theme and a food theme. Your bonus games will be different depending on which theme you are playing:

The i-Slots range certainly does add an extra layer of complexity to the standard gameplay, especially when there’s essentially three different themes in one game. It makes you want to keep playing though and that’s always a good thing. This is good fun and well worth checking out.