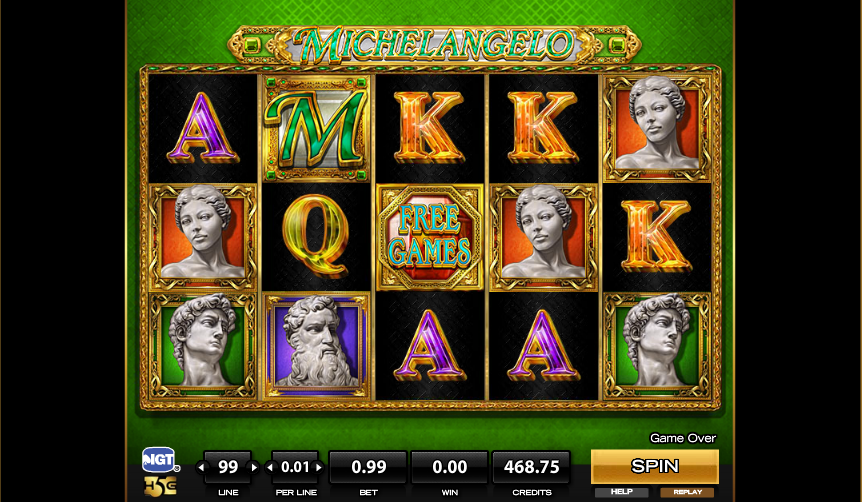 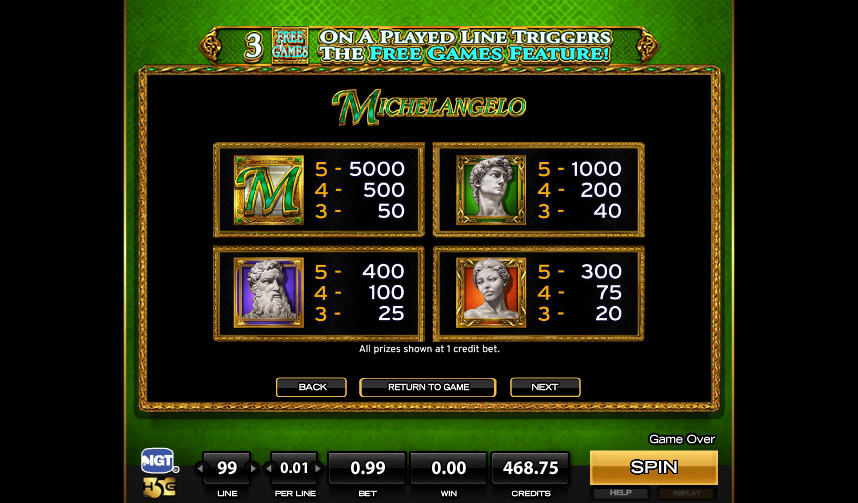 If you’re the sort of person who likes a side serving of culture with your online slots than we may just have the thing for you; Michelangelo is a game dedicated to the great 15th century sculptor, painter, architect and one of the greatest artists of all time. It’s definitely not about the Teenage Mutant Ninja Turtles. This IGT slot features Tumbling Reels and free spins so play it now or read the review below for more information.

Michelangelo is a five reel slot with three rows and up to ninety-nine paylines; IGT’s design is typically basic but everything is clear and there’s a preponderance of gold edging to pretty much everything.

There are four high value symbols including a big green ‘M’ and three sculptures – David, Moses and the Venus de Milo; Q, K and A make up the lower values.

The wild symbol is a purple ‘Wild’ on a gold background while the bonus is a ‘Free Games’ icon which appears only on reels one, two and three.

Always one of our favourite features, Tumbling Reels are also known as Cascading Reels in other games. Every time you land a winning combination, those symbols involved will disappear and the spaces created will be filled by more symbols dropping in from above. If you then make another combo, the same thing happens again and this sequence continues until no more wins are formed.

This is triggered by landing three of the Free Games bonus symbols on reels one, two and three on an active payline. You will receive between one and four spins but if your triggering symbols occur on more than one payline you will receive more spins.

During this round the original wild appears on reels two, three and four but there’s also a new wild (on a red background) which pops up on reels one, two and three.

It’s just small thing but the Tumbling Reels take forever to get going – just press the ‘Spin’ button again to speed things up.

We like Michelangelo although we found the free spins quite hard to trigger; the Tumbling Reels keep those wins ticking along nicely though and there’s a reasonable RTP of 94.90%.