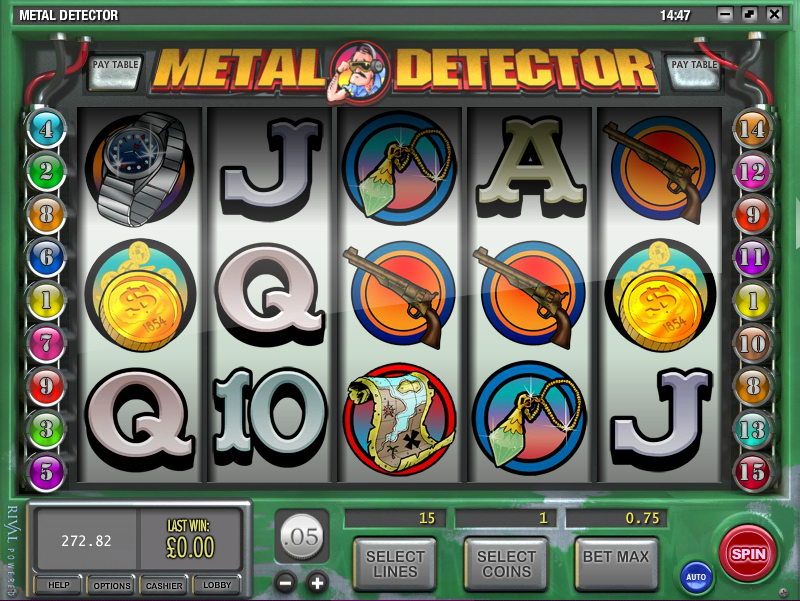 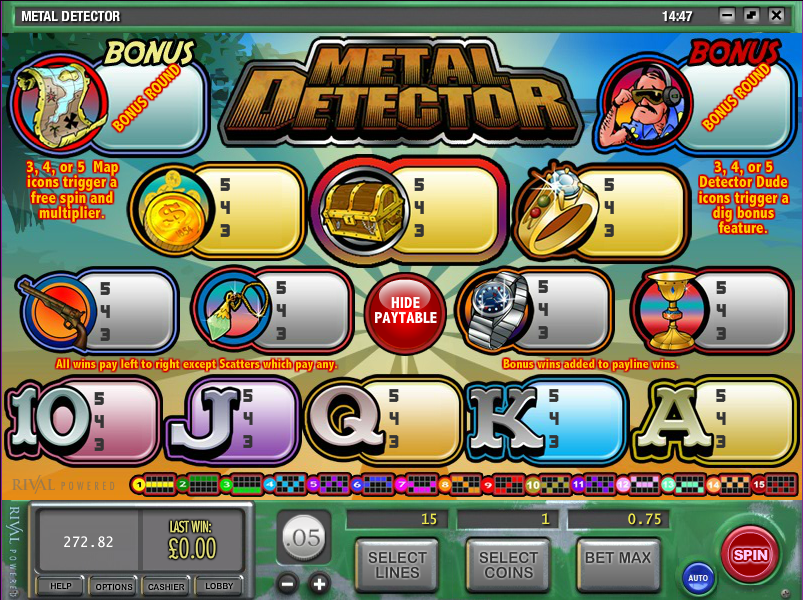 Having never been tempted to use a metal detector under any circumstances, we are a little unsure of their attraction . Sure, you might find a two thousand year old hoard of Roman coins but you’re more likely to unearth rusty tin cans and old nuts and bolts. Still, metal detecting is the theme of this online slot from Rival Gaming which, helpfully, is called Metal Detector.

Metal Detector features five reels and fifteen paylines and the whole playing area is built into an frame which we imagine is the screen of the detecting device. Black and red wires lead from the top of the reels down into the payline indicators.

Aside from the standard 10, J, Q, K and A, symbols include a gold vase, a watch, a necklace, a pistol, a ring, a treasure chest and a gold coin.

Unusually there is no wild symbol here but there are two scatter symbols and these are the treasure map and the Detector Dude – both of which activate separate bonus features.

This feature is triggered by landing three, four or five of the Detector Dude scatter symbols anywhere on the reels. You will then be shown a paragraph of instructions on how to proceed and reading this will probably take longer than playing the game itself.

Essentially you have to use the ‘left’ and ‘right’ buttons to guide the Dude along the beach to a spot where he can dig. Use the map in the bottom left hand corner to do this and when you are above a red cross, just click ‘dig’ and a hole will be dug and a prize revealed. Watch the video above to see this in action.

Three four or five of the map scatter symbols anywhere on the reels will kick this feature off and you first be asked to pick a red cross to determine the number of spins. Then choose one of four locations to find a multiplier.

The spins will now start and will hopefully work out profitably for you.

This is graphically a quite basic game but the two bonus features seem fairly easy to trigger and some creativity has gone into their design. This older slot is still worth a go in our view.