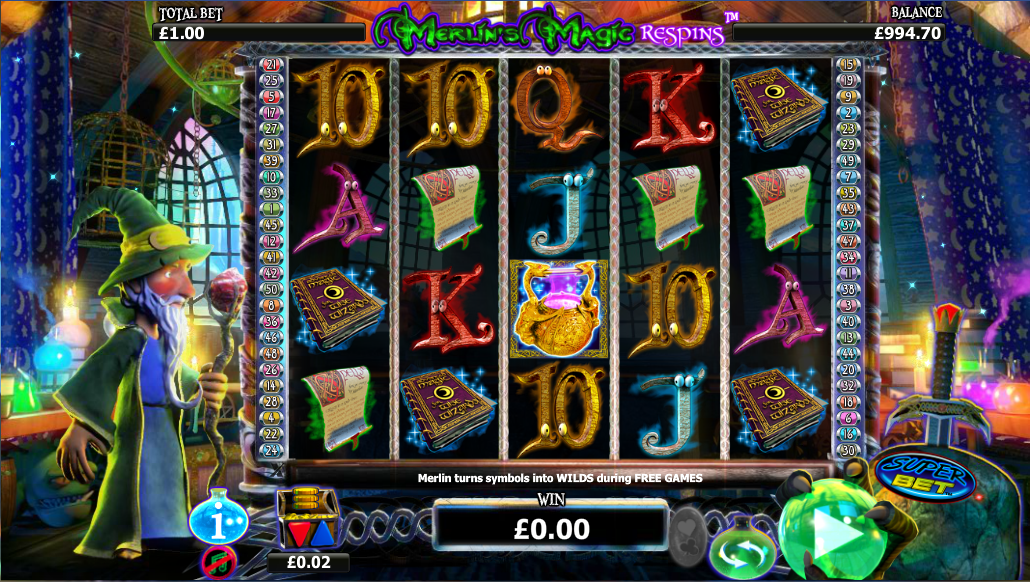 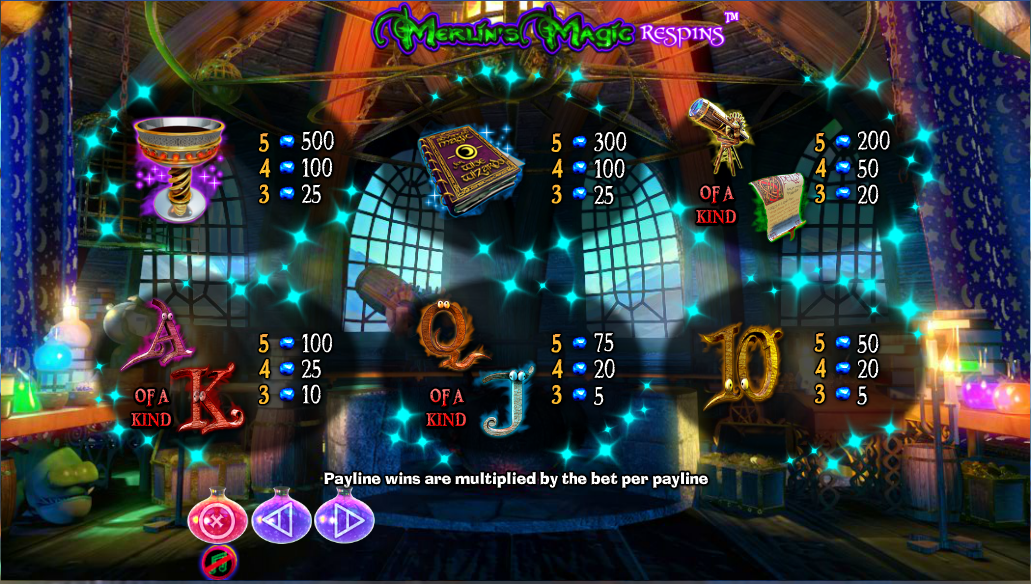 If you’ve enjoyed playing an online slot called Merlin’s Millions then you’ll be pleased to hear that NextGen Gaming have released a follow up to that game. It’s called Merlin’s Magic Respins and it once again features King Arthur’s magical sidekick. It’s similar in look to it’s predecessor and still includes the Superbet feature but the bonus features are different.

Merlin’s Magic Respins plays out over five reels and fifty fixed paylines and all the action once again takes place in Merlin’s laboratory. The man himself stands to the left of the reels while potions bubble and sparkle in the background.

The main symbols are all magical and include a spell on parchment, a telescope, a spell book and golden cup. Lower values are the standard 10, J, Q, K and A.

Merlin himself is the wild symbol and the scatter symbol is a golden cauldron which activates the main feature.

Merlin appears as a stacked wild on reels two, three and four, meaning that’s it’s possible for him to cover all positions on those reels. If he does and you have the Superbet feature enabled, the wild reel will remain in place and you will receive between one and five respins depending on the size of your Superbet.

During this feature, stacked wilds can appear on all five reels.

NextGen’s Superbet feature is back in this game but it’s a little different from the original; here you can bet an extra amount of credit (between 50 and 300 coins) and if you trigger the Wild Respins you will receive more spins (between 1 and 5).

Seven free spins are available if you can land three of the golden cauldron scatter symbols anywhere reels two, three and four. The stacked wilds are also active here and Merlin may also pop up to randomly zap some symbols into wilds.

After any win you can try to gamble that amount by clicking the hearts/clubs ‘Gamble’ button below the reels. Now you must predict whether the next card drawn will be black or red in an attempt to double up your money. If you’re wrong you will lose it all.

The Superbet feature certainly makes things more exciting but it can burn through your money quickly if you’re not having much success. Make sure you have plenty of credit if you want to use it, especially the higher levels.

It seems a little hard to win on this slot but that’s probably just our bad luck; it’s definitely fun to play with lots of nice graphics and animations and we would recommend it.